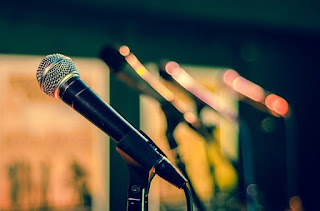 The Candidate Forum last week sponsored by the Leadership Germantown Alumni Association gave  viewers insight into the the aldermen candidates' views on mixed-use residential projects (apartments) and alderman's role. None have previously served in elected office. First, some general observations:

The candidates agreed on a broad variety of issues:

support the needs of GMSD

property owners can sell their land to whomever they want, but zoning has to be followed.

all declare themselves to be independent of any group, and will govern independently.

Unfortunately, there were not any questions about the crumbling drainage ditches or other infrastructure issues.

The moderator, Richard Ransom, did not pretend to be neutral, as he stated that the leadership of the City was doing a great job, and he loves the idea of mixed-use residences and living at Thornwood. That was both jarring, and also refreshingly honest. A neutral moderator would have been much preferable, but at least he did make his bias known, several times throughout the debate.

I am going to focus solely on the differences among the candidates, which are centered on their approach to governing, and their feelings about mixed-use developments that contain a residential component (apartments).

I like to make small parody videos, and viewing after this debate I was moved to make this gif about the candidates' views on governing style:

The Entire Forum Video
If you have time, please view the entire forum video, or, better yet, I added a link below to the specific location in the video for each position. Here are the distilled views of the candidates on the two issues. I link each of their websites-- just click on their names. If they have served on a Commission, I note that in italics directly under the candidates' name, and something about their tenure.
Position 3 click for Forum

Development- Citizens Don't Want More Apartments.
We have apartments and there are vacancies. No to Carrefour

Commissions: Ms. Hicks has served on several commissions, and was an early supporter of Smart Growth. She currently is on the Planning Commission. She voted twice for the cell tower at Dogwood School, and recused herself once. She voted for the original outline plan of Carrefour, but her only absence of the year was when the second, revised Carrefour outline plan was considered. She has supported all administration development plans in the last two years.

Role as Alderman- Wants Decorum and Respect at BMA

Development- Won't Support Any  Development that Overcrowds Schools, Germantown zoning land area will always be 90% residential, so mixed-use residential not a big deal, since it will be limited to 10% of the land area.
Position 4 click for Forum

Commissions: Mr. Miles serves on the Great Hall Commission. It has no real role in local governing.

Role as aldermen--represent the citizens. Disconnect between current leadership and citizens.
Development--Germantown is a great place to live, we don't need 6-8 story buildings popping up. "No" to apartments in mixed-use, no to Carrefour.
Brian Ueleke

Commissions: Mr. Ueleke has served on many commissions, including the all-important Financial Advisory Commission, that passes the budget on to the BMA, including the capital expenditures budget involving infrastructure needs.

Role as Alderman-- Explain City decisions to citizens through communication.

Development- All projects will be evaluated by impact.

Role as Alderman-Follow the will of the people

Development- No to mixed-use residential. People want safety and uncrowded schools. No to Carrefour.

Role as alderman-Follow the will of the citizens.

Development- People move here because of the small town feel and the schools, not to live in an urban center.

Commissions: While he has not served on a Germantown Commission, he served on the Shelby County Land Use Control Board.

Role as alderman- Try to compromise.

The other candidates had no funds on June 30.

Here is another gif, about the will of the people on apartments: