In the Protecting Germantown Employees Comes at a High Cost for Taxpayers post dated July 16,  I discussed the insurance policies for upper level Germantown employees and elected officials that have cost the city 1.5 million dollars in premiums to date, with future obligations that are certain to be costly. These are the policies that made "little or no sense" according to the attorney hired by the city.  Rocky Janda confessed to the Commercial Appeal that it took him three or four months to even understand them.

A bit of the history of these expensive and confusing policies is revealed by the open records requests.  As can be seen in this document, these Equitable policies were quietly and quickly passed after a vote for playground equipment, in the same resolution as the renewal of the Unum disability policies, making it look as though these complex and costly life insurance policies were simply renewals. This is the opposite of sunshine, of course. Take a look for yourself: 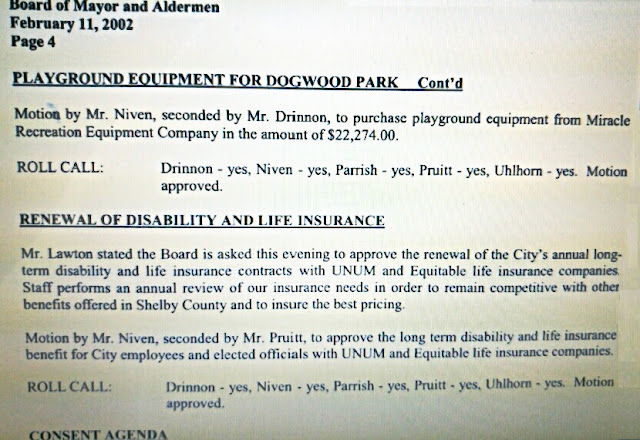 There was no opportunity for these policies to be scrutinized by the public. Surely the citizens of Germantown deserved more transparency than this from their officials.

Reminder: The documents discovered as a result of open records requests belong to all Germantown citizens, not just those requesting them.  All of us are patiently waiting for the Commercial Appeal (which has previously discussed a number of documents) to replace Jane Roberts. In the meantime I will begin revealing more documents.

For now, I intend to function less like a blogger and more like a reporter. Any subject that I write about will be submitted in advance for comment to the appropriate city officials. I want to give them every opportunity to set the record straight. If anything I post is incorrect, it will not be for the lack of trying. Moreover, because this is still in blog format, I can edit a post after I “publish” it, in order to include appropriate remarks or make any corrections that I feel are needed, including relevant explanations from city officials not previously submitted.

Before we address the evidence (and associated copies of documents) that Mr. Lawton may have exceeded the vacation buyback policy by over $7000 in FY2009, you may review my earlier blog post on this subject.

Thank you Jane Roberts Vacation Buybacks and Other Perks

The relevant part of that blog quoted the Commercial Appeal:
“The city of Germantown adopted its buyback program in 2004, initially allowing employees to sell back 100 hours. In 2008, the number of hours doubled. It is not clear that the Board of Mayor and Aldermen approved the change."

The policy itself can be found in the Administrative Personnel Policies manual, made available here courtesy of Shining a Light on Germantown.

It is worth noting that this pdf file was not discovered through an open records request; instead it was found online by a Germantown citizen. This site is not publicly available on the City of Germantown website. This is unfortunate. The Germantown taxpayers have a right to know the city's administrative personnel policies.

The first thing evident about the vacation buyback policy is that it is confusing. Read literally, this could be taken to mean that 400 rather than 200 hours of vacation buyback time is potentially available to employees each year. It is commonly understood, however, that the limit is 200 hours per year. Even that is extremely generous.  Knoxville, for example, allows a maximum of 96 hours of vacation buyback per year. Las Vegas, which has the most liberal policy that Sarah Freeman could find, gives its employees a maximum of 210 hours per year.

According to Sarah Freeman,

"Section 4.03 of the Germantown Charter states: All employees of the City, exclusive of elected officials, shall have their salaries and other benefits incidental to their employment established through a compensation plan approved by the Board.

However, according to BMA Minutes, neither the 2004 nor 2008 Vacation Buyback benefits were approved by the BMA. Emails provided through the TN open records requests show that when two of the current aldermen learned about this benefit in 2015, they were shocked at its generosity."

Documents obtained by open records requests reveal that even this shockingly generous policy was apparently not good enough for Mr. Lawton. In fiscal year 2009, Patrick Lawton bought back 300 hours, exceeding the 200 hour limit by 100 hours.  Please note that the policy states that the City Administrator's approval is necessary for all vacation buybacks. After this was discovered, I sent Mr. Lawton the following email on August 18. 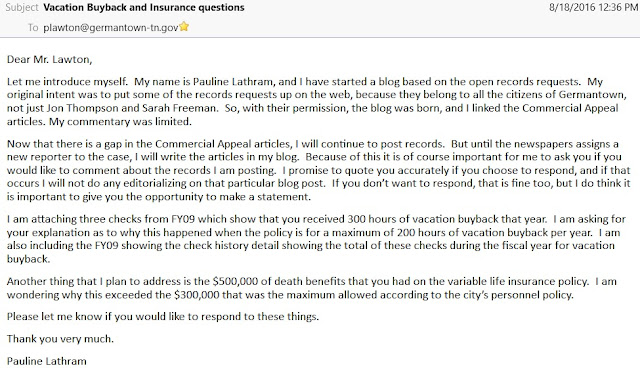 I also sent Mr. Lawton the following documents, showing a total of $22,933 in vacation buybacks for FY2009. 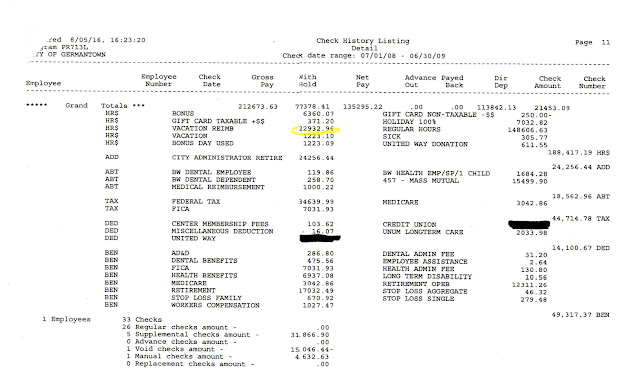 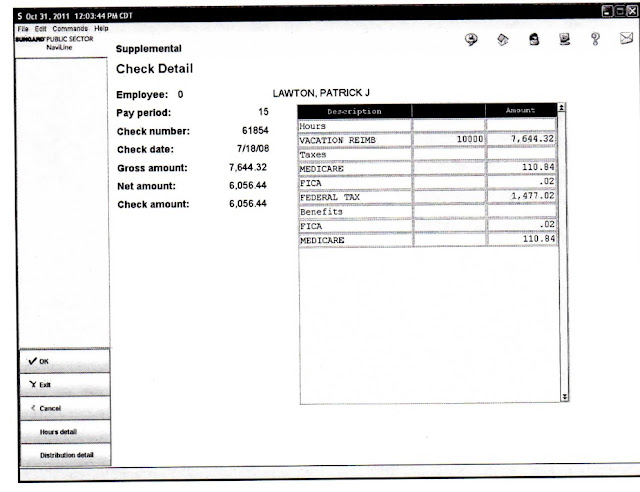 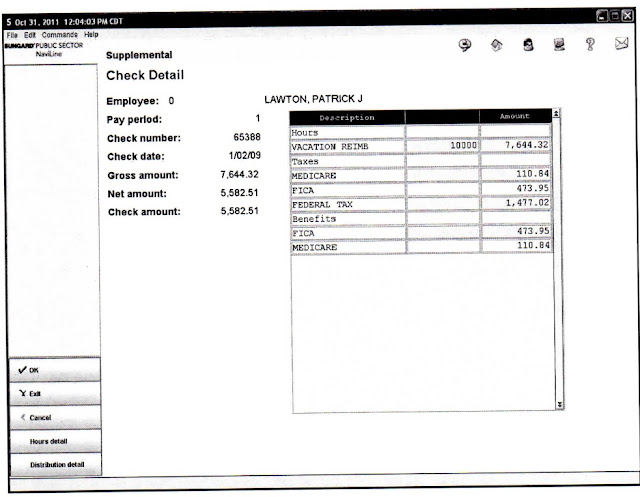 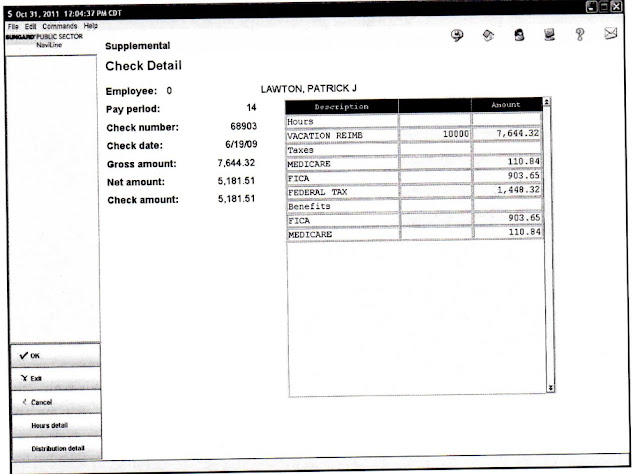 Mr. Lawton has not yet responded to my email. If he replies later, I will either insert it into this post or include it in a later one.

As you can see, in my August 18 email, I also asked Mr. Lawton to explain the $500,000 in death benefits provided under his variable life insurance policy, this being $200,000 more than what appears to be the maximum allowable amount permitted under the City’s personnel policy. The documentation for this may be viewed at: