Carmel, Indiana the Model for Germantown....

Without any proof, our leaders boldly assert that the City receives fiscal benefits from dense development. Let's take a look at Smart Growth in Carmel, Indiana, which our City leaders choose to emulate. Carmel, in fact, is a perfect example of dense development not resulting in fiscal health. While it is an affluent city, it is now mired in one billion dollars in debt, has had its debt rating downgraded twice, and is particularly vulnerable to economic downturns.

But Clay Bailey, writing for the Commercial Appeal on June 23, 2016, after visiting Carmel declared it a "nice prototype for Germantown's future."  He also considered Carmel "one of the success stories of the Smart Growth approach." Ron Maxey, in a later Commercial Appeal article that year stated that Carmel is a "model for the Smart Growth concept Germantown would like to emulate long term," and it "reimagined things like density, land use and transportation probably 15 years before Germantown started thinking about it." As proof of the City's commitment to use Carmel as a model, city leaders took a nice long weekend trip to Carmel in early May, 2016, where they explored the city's numerous roundabouts, and other features of Carmel. 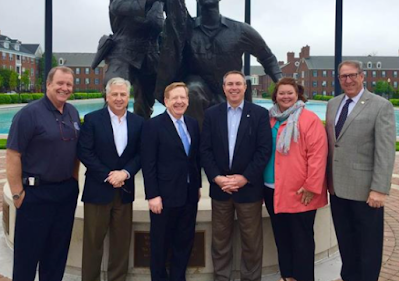 Carmel, a suburb of Indianapolis with a population of 100,000, is the hometown of City Administrator Lawton. Mayor Palazzolo even lived there for a short time. It was reported that Mayor Palazzolo was particularly enamored with the look of the buildings up against the sidewalks in the downtown area when he visited the City.

No doubt Carmel has transformed its roadways by replacing traffic signals with roundabouts. It has a thriving arts district. It is also a City in turmoil politically, with a controversial Mayor who has led the City down the path of fiscal irresponsibility. Do you think that could not happen to our City? I started looking at Carmel again after The Beacon Center of Tennessee ranked Germantown #30 out of  30 cities in Tennessee in "cost of government".  If we were behind Carmel by 15 years, what is in store for us 15 years down the road, if we continue on that same path? What I found out is not pretty.

I take you no further than an article in the Indianapolis Monthly this past May-- Does Carmel Have a Spending Problem?  It details the cost overruns of a City-subsidized hotel project that had gone over budget by 18 million dollars. The Mayor did not see fit to inform the governing body of this overrun. Tim Hannon, a freshman City councillor mused: "Is this how things work here? I have to find out about the city’s finances from reporters?"

Considering that both Aldermen Scott Sanders and Dean Massey complain that they find out about city matters from newspapers before they are informed by the administration, one wonders if our leaders emulate their lack of transparency from Carmel leaders, in addition to their penchant for dense development. The article states: "In Carmel, it’s increasingly clear that the amount of spending may be only part of the problem. What really infuriates Brainard’s most vocal critics is the opaque way in which his administration goes about doing it."

At one point Mayor Brainard wanted to purchase a five million dollar carousel. Ultimately that was turned down, but the debt rating was downgraded shortly thereafter. According to the Indianapolis Monthly article, S&P wrote in a letter to the city that it was concerned that Carmel’s “crowded budget,” “high fixed costs,” and “heavy dependence on sometimes more volatile tax-increment revenues” would leave it vulnerable to the effects of a recession. One has to wonder about the fiscal effect of the pandemic in Carmel.

In one way Carmel wanted to emulate Germantown. It used Germantown as an example when their Mayor's salary was raised, and he became the highest paid mayor in Indiana as a result. Perhaps Germantown should be looking at Carmel for salary comparisons. Although I do not have recent figures, in 2018, after the raise, Mayor Brainard was due to make $149,000, compared to Patrick Lawton's then salary of $212,500. Please note that Mayor Brainard also serves as the administrator of Carmel.

So goes the story of Carmel. We haven't heard as much about Carmel from our leaders lately. I wonder why not? I also wonder if roundabouts are still in our future. And we all wonder what our City will be like in 15 years.