Abigail Warren, who recently moved from the Commercial Appeal to the  Daily Memphian, reports on the special called meeting of the BMA this week.

Germantown Board of Mayor and Aldermen Vote to 'Streamline' Its Meetings

Because this meeting took place the same night as the Board of Education meeting, it was not available on the City website for viewing. I believe there is an audio recording of the meeting, but it has not yet been posted on the website. Two things were discussed at the meeting--1.) procedural changes for meetings and 2.) commission members and aldermen liaisons.

Sarah Freeman attended the meeting and provided clips of what she considered to be the highlights. We owe her a debt of gratitude for this because she claims that she recorded for four hours! I watched the clips, uploaded them to YouTube and give a brief discussion of the content of each.

A parliamentarian will be hired for the meetings. Everyone seemed to think this was a good idea. That way if a citizen is cut short on time in Citizens to Be Heard (as happened once to Sarah Freeman), we can blame the parliamentarian instead of the Mayor:


The BMA voted 3-2 (Janda, Gibson, and Owens YES, and Massey and Sanders NO) to cut in half the amount of time that aldermen are allowed to speak at the BMA meeting about an issue, from two ten minute talks to two five minute talks. The discussion speaks for itself:

A proposed measure to ban the use of cell phones by aldermen during the meeting was discussed, but there was never a vote on this. There was a little pushback on making this mandatory, and Alderman Massey pointed out that, because he has a small child, it is important for his wife to be able to reach him. They all agreed they needed to do "better" about their cell phone usage, but, again, no measure was passed.

Some of the oddest discussion took place as the BMA discussed security measures for meetings that were proposed by Rocky Janda. Alderman Janda feels unsafe at meetings, and wants metal detectors installed for the public. The discussion of guns began. As it turns out, the administration had not researched state law on the subject, and Mary Anne Gibson wanted to talk to the police about this measure, so no action was taken. Ms. Gibson asked Mr. Massey if he brought a gun to meetings. Mr. Massey refused to answer because he does not want potential criminals to have that information. Ms. Gibson later said it would make her uncomfortable if Mr. Massey carried a gun. Scott Sanders feels that metal detectors would be a deterrent for citizens who would otherwise attend BMA meetings:

The clip below shows that the appointment of Dick Vosburg to the Financial Advisory Commission caused some controversy. He led the Germantown Values PAC endorsing Mayor Palazzolo and Alderman Gibson. Alderman Massey pointed out that Jon Riley and John Peyton were turned down for commission memberships because they failed to meet a non-specific "culture of kindness" test when an anonymous citizen put copies of their social media posts in the aldermen's boxes. Then Alderman Massey reminded the aldermen of the vile nature of the political PAC that attacked private citizens and spewed misinformation during the campaign.

Scott Sanders stated that the the Vosburg led PAC lied to the Election Commission and stated that they were not political, when in fact they were. For several days they conducted exit polling within 100 feet of the polling places, in clear violation of election rules. Later, after a complaint was filed, Mr. Vosburg was told he had to comply with the 100 foot rule. Alderman Sanders could not support someone on the Financial Advisory Commission who lied to the Election Commission.

However, none of this deterred the other aldermen from defending Mr. Vosburg. It is disappointing that the BMA, in affirming the nomination, did not use consistency in applying the "culture of kindness" standard. It also seems inadvisable to allow a person who lies to a governmental body to serve on the Financial Advisory Commission. The yea votes for Dick Vosburg were Aldermen Owens, Janda, and Gibson, with Sanders and Massey voting "no".

In this next clip (below), Forrest Owens admits that he, Alderman Gibson, and Alderman Janda all discussed potential commissioners prior to the meeting. Discussion of City business outside of a public meeting is a clear violation of the Tennessee Sunshine Law (first discussed in a July 2016 post). None of these aldermen are new on the job, and they all know better. The Sunshine Laws have a purpose. What gives? Are we supposed to shrug our shoulders and forget about it? If the City cares so much about procedure that it is hiring a parliamentarian, shouldn't our aldermen obey state law? What other City business is being discussed outside of the public meetings, in violation of the law?  It simply is NOT okay for our aldermen to make side deals about City business outside of a public meeting. The citizens should rightfully be infuriated about this flagrant breach of the law. 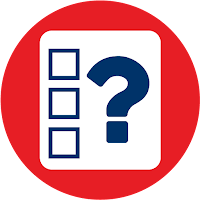 The Commercial Appeal reports that John Barzizza is challenging the election results, and asking for a recount of the votes. Here is the article:

The complaint can be found here (if you cannot read The Commercial Appeal article).

Here is a portion of it: 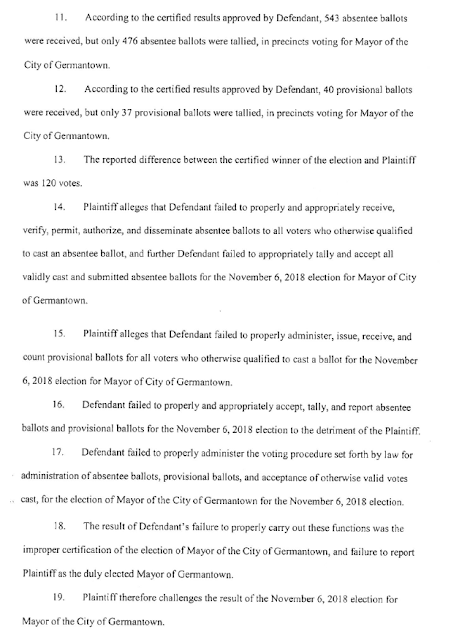 I put together some charts to help show what I mean: 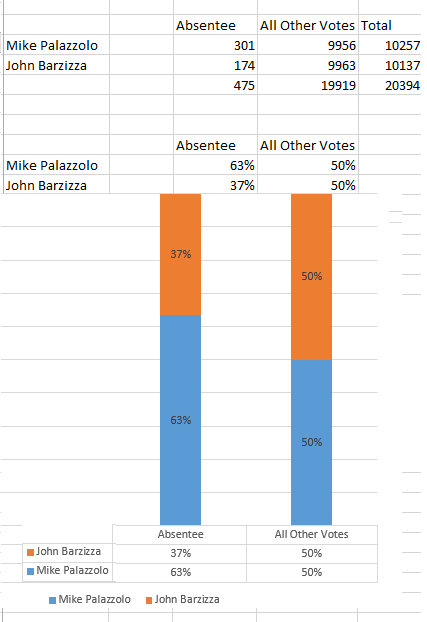 The discrepancy between the absentee-ballot results and the results in the other three categories cannot be explained by chance. By this I mean that the absentee voters differ, in a statistically significant way, from the 20,000 voters comprising the other three categories. The sample sizes are sufficiently large that, in the absence of a statistically significant difference, the absentee ballots should have been cast in a ratio similar to those cast in the other three categories.  I confirmed this by entering  the SCEC certified results into an on-line chi square statistical analysis. The computation showed that there is a far less than one percent (p value) chance that the variation between the absentee-vote results and the results of the other three categories is explained by chance. I would tell you the precise percentage of the possibility that the variation could be explained by chance, but when I tried to compute the exact "p" value (the level of significance), the software computed a value so low that it could not yield a number with that many zeroes to the right of the decimal point. You may quickly check my results by entering the figures into the linked website.

In non-technical terms, this simply shows that it would be next to impossible for the absentee ballots and other ballots to have come from the same data set.
What does this mean? It means, quite simply, that the 475 absentee voters were different in kind from the remaining 20,000 voters in that they supported Palazzolo by an almost 2:1 margin. This seems quite surprising when one compares this year's breakdown of the absentee ballots with that of  the 2014 election. In 2014, absentee ballots broke in the same ratio that they did in the other categories (56% to 44%): 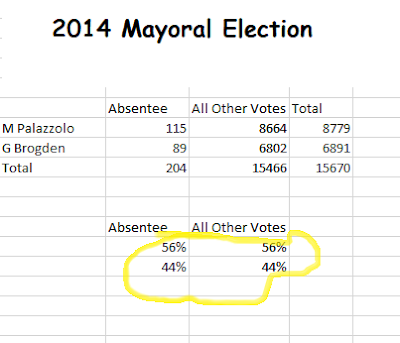 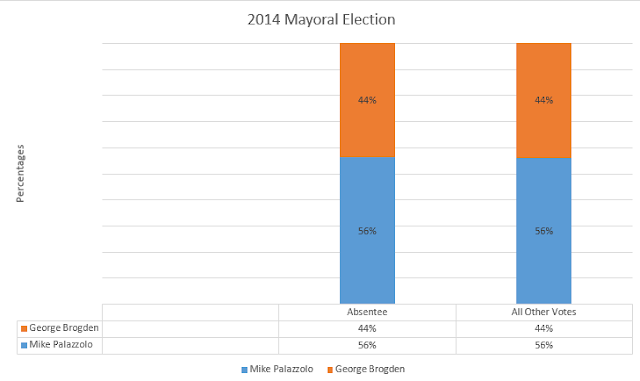 Take a look, for example at Germantown #3 precinct. I picked this precinct because It includes Villages of Germantown, a retirement home that, one would expect, would provide a number of absentee-ballot voters: 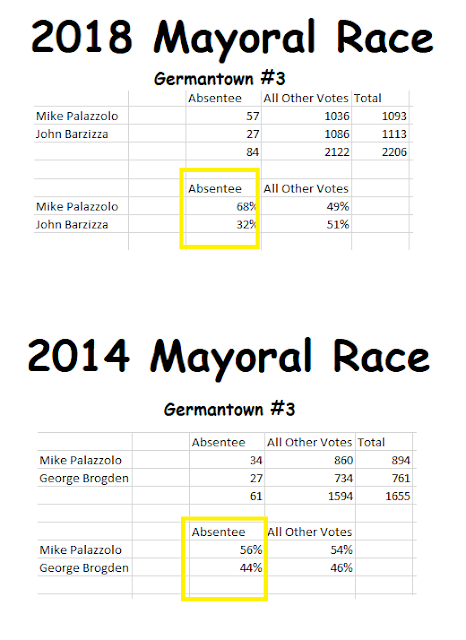 I submit that the discrepancy in this year's election between the absentee-ballot results and the results in the other categories raises a serious question about the handling of the absentee ballots -- a question to which the SCEC must provide a satisfactory answer in order for the voters to have confidence in the integrity of our election process.

The State of Tennessee has strict guidelines concerning absentee ballots: