Joint Work Session--BMA and GMSD and Capital Expenditures for Schools 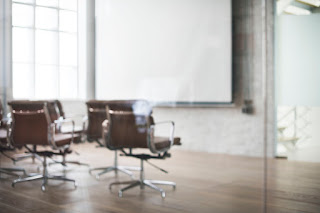 The joint session of the BMA and the School Board occurred well into the budget making process because of late scheduling and conflicts. You may listen to the commentary from the May 14 BMA meeting, where Alderman Massey discusses this, and his reluctance to vote for items such as a two million dollar sewer project benefiting a proposed development without first hearing from the school board about its capital expenditure needs. The City had scheduled a date, but several school board members were not able to attend at the scheduled time. Alderman Barzizza had even cancelled a trip in order to be able to attend on the original scheduled date. Finally, the work session to address the capital expenditure needs of GMSD was held on June 5.

Brief Summary:  In the joint work session, the City stated that the budget for capital projects for schools included $1.5 million for a boiler for Riverdale, and $200,000 for part of a matching grant for the field house/band room. But, at the second reading of the budget on June 11, only the $1.5 million dollars was left under the Municipal School budget. There was $250,000 in a "contingency" (see graphic below under BMA meeting heading), and hopefully that includes the $200,000 for the field house match. I did not hear this line item discussed at the BMA meeting.

Although not related to capital funding projects, Suzanne Jones informed the BMA that administrative costs would immediately rise by almost three million dollars per year as soon as our new elementary school opens, and there would be no offset in revenue from the state or county. She said everyone needs to realize this, and that if GMSD is to have "excellence always" in our schools, it will require operating funds in the future.

The City and GMSD turned down Suzanne Jones' request to record the work session, but citizen Sarah Wilkerson Freeman attended the meeting and recorded it. I put it on my YouTube channel. took notes, and time stamped my notes:

Link  City Administrator Patrick Lawton talks in general about capital improvements plan. CIP has six year plan, voted on one year at a time, think about credit rating, debt or "pay as you use." Speaks of City-wide capital projects, e,g. new fire stations. He seems to be talking a long time and taking up a large percentage of the time for what is supposed to be a joint work session. Right as I was typing this, I note that Ms. Jones asks him a question, trying to keep on topic of the schools capital improvement budget.

Link- after almost ten minutes of background by Mr. Lawton, Ms. Jones interjects a question about the schools. She points out that the school needs need to be planned for the future, integrated with City. There is back and forth between the two of them. Then Mr. Lawton takes over again.

Link  Finally getting to subject of schools, from general fund reserves of budget $7.8 million in CIP, included (from Mr. Lawton's conversations with Mr. Manuel) is $1.7 million for schools--for boiler at Riverdale $1.5 million, and $200.000 for matching grant for field house). Ms. Jones asks to confirm that these are these are the only two items in this years City budget for the capital needs of the schools. Mayor Palazzolo states that the City is widening Forest Hill, and that is for the school (although in truth this was needed even without the school). In future years, more can be done, mentions possible $5 million expansion of Houston Middle School for FY20 if needed then. He said it would not be able to move it up a year to FY19. Ms. Jones asked if proper procedure was for school board to request capital expenditures for schools as needed, and City could tell the schools when not feasible.

Link  Mr. Massey asks for clarification from Mr. Lawton on how the two projects for the schools were selected.  Mr. Massey says legislative branch should have say in the projects. Mr. Lawton states  the budget he submits is the City Administrator's budget, and then the aldermen can look at it and change it, but all need to fit into the fiscal plan.

Link  Mr. Manuel- Elementary School capacity is satisfied with new school. Demographer underestimated enrollment. We are over capacity in middle schools now, without even adding transfers. Teaching out of science labs, etc. Mr. Manuel talks of the various ratios used to estimate enrollment. Looked at each undeveloped portion of City and projected out numbers of students if developed. Lots of detail here.

Link Mr. Manuel begins talking about the capital needs of the schools-- a five year list. Listed past capital improvements completed --Priorities for this year, for the City to fund-- The Board- (GMSD provides funds for some capital improvement projects, the below are what it requests from City):

(At the time, only $1.5 million for the boiler and the $200,000 for the matching field house grant are in the City capital improvement project--later $500,000 is shifted by City from the boiler to the security upgrades.)

Link In response to Mr. Massey's question, Mr. Manuel speaks about the security issues that need to be addressed in the future, such as moving doors so that people get buzzed in through the office rather than the hallway, fences, etc. There may be grants for this and they do not yet have estimates of numbers, according to Mayor Palazzolo.

Link Police Department spokesperson addresses future security needs of schools in more detail. Discussed active shooter training, relationship with kids, and training for kids and staff, their job is reactive, assessments of security, opportunity for state and federal grants, total $$$ cannot be estimated yet for fencing, building new entrances, connecting two buildings at HHS, should have more numbers in the next few months, HHS the priority.

Link,  Ms. Jones suggests another joint meeting between BMA and GMSD Board after more security numbers are known.

Link Alderman Mary Anne Gibson says that the City has a certain amount of money they can give the schools, and it is up to the school board to determine priorities. Shifts in money that the Financial Advisory Commission says is available can be handled by School Board.

Link  Mayor Palazzolo cuts off the conversation and says time is getting late and everyone is concerned about safety, and City provides officers for safety, ready to be a great partner.

Link  Ms. Jones- Again states importance of having joint meetings at the same table, Mr. Massey agrees. Ms. Jones--don't lose sight--operating expenses increase by almost three million dollars in general funds when the new school opens, we won't get any more state money. Children are already sitting on top of each other. GMSD is not a funding body. Will need operating funds. Where will the funds come from? Aldermen need to understand that. Will need four million dollars per year in general operating expenses if we want to hit excellence in our classrooms, keeping optimal size classrooms, everyone needs to know that.

Link Alderman Barzizza acknowledges what Ms. Jones said, and in particular we must get back together and make sure security needs are funded when we have a better idea of costs at the end of summer.

Fast forward to the second reading of the City budget on June 11. It seems that the $1.7 million proposed by the City for the capital expenditures for the schools has dropped to $1.5 million. 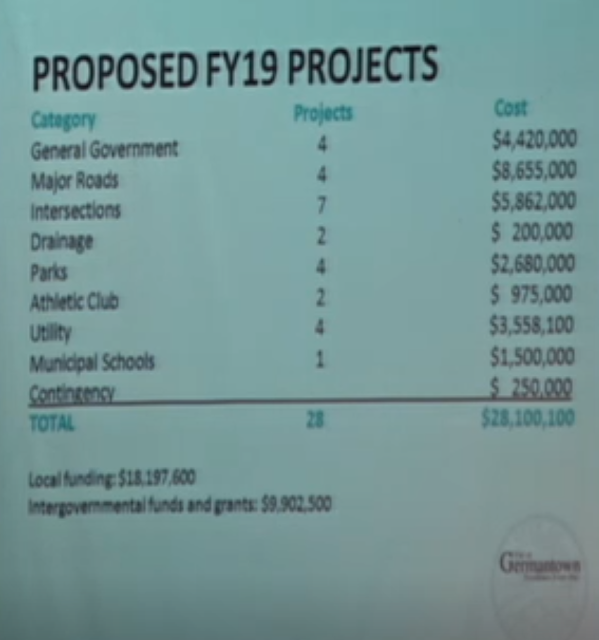 The $1.5 million is now spread out between two projects, with $1,000,000 for the boiler and $500,000 for security, based on the discussion at the joint work session, where Ms. Jones, Mr. Barzizza, and Mr. Massey called for money for security in the schools. Mr. Lawton discusses this at at this link at the June 11 BMA. If more money is needed for the boiler, it could be pushed into next year's budget.

Mr. Barzizza asks if, in the event that grants are received for some of the security needs, that amount can be shifted to the boiler (link). Mr. Lawton says yes, but it depends on when the funds come in.

The $200,000 for the matching grant for the field house was not mentioned in the BMA meeting. Hopefully it is under "contingency" which is listed in the graphic.

Mr. Massey states that he would have funded some of the needs of the schools over things like streetscape projects. (link). He would have put a higher priority on school needs. Also remember that we have in the budget  $2 million for a sewer project for the Western Gateway   This would be needed for Carrefour redevelopment. Please remember that  Carrefour is covered by the apartment moratorium, although both the Economic Development Commission and the Germantown Chamber of Commerce have asked that it be exempted from the moratorium.

The third and final reading of the budget is Monday night, June 25, at the BMA meeting.

Note: I made an edit to this post. Originally I stated that the $200,000 in matching funds for the field house was no longer in the budget. Although it was not included and not discussed under the municipal schools budget, I realize now it could be under the title "contingency" which was not discussed.