In a 3-2 vote, GMSD Board gave Jason Manuel a new Four Year Contract 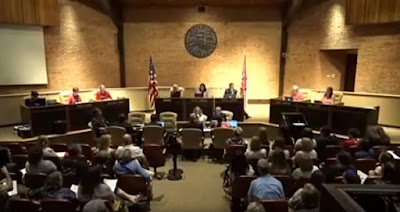 Will fireworks happen, my husband asked me as I left our condo to take in the GMSD Board meeting last night? The answer? Yes. To access the two most forthright and controversial parts of the meeting, which best exemplify the divisions in the Board of Education, you may skip directly to Suzanne Jones speaking about her frustrations with the Board and Superintendent Manuel, and Lisa Parker's pronouncements that were nothing short of jaw dropping, including this statement: "It takes two or more people to make bullying happen." Two audience members came close to being removed by security during her presentation, and they and many others voluntarily left the meeting in protest. Chair Betsy Landers corrected Ms. Parker several times for being off-topic.

For those who want more detail than the above but do not have three plus hours to listen to the entire meeting, I time stamp, link and summarize what happened at the GMSD Work Session and Board Meeting last night. In addition, I add some of my own observations and comments. I highlight my thoughts by using blue text, so the reader can distinguish between the summary and my commentary. Because this is a tedious task, as usual this is going to be in note-taking format, rather than a formal essay, and will be in in chronological order. Also, for brevity, I am not covering every detail.

Began with discussion of evaluation of Superintendent Jason Manuel-- an overall rating of 3.9 out of 4.0, "highly effective". Noted that these were based on "measurable" rather than subjective goals.  00:48

Suzanne Jones asked Valerie Speakman, speaker and attorney featured in June 2018 GMSD Retreat Video about her role. Ms. Speakman said Chair asked her to speak, and there is "no contract." Previous counsel engaged on a month to month basis. Debra Owen, former School Board Attorney is gone??  05:45

Ms. Speakman began discussion about specifics of Superintendent's contract. Fortunately she stuck to legal issues and, unlike the Board retreat, foregoes comparisons to obscure movie scenes and does not repeat her thoughts that 50%-90% of those people who say they are bullied are actually bullying. 7:12

Board members (mostly Suzanne Jones and Amy Eoff) discussed the contract and various changes needed. There was general agreement that some of the specifics needed to be changed, such as benefits being excluded in any payoff to the Superintendent if the Board replaced him prior to the contract's expiration.  25:41

Ms. Jones asked, what are the benefits of an extension?  A rationale is needed, because of fiscal impact. Why two years before expiration, instead of one year? Ms. Jones called for fiscal responsibility and Lisa Parker responded by saying it is a very emotional decision for her. 48:02

Ms. Jones pointed out that the justification that Jason Manuel used in the past in negotiations for his contract was that he did not want to do it in an election year. But this is an election year. He is not being consistent.  54:00

Jason Manuel defended his desire for a new contract, saying his staff and teachers need stability. Somehow I feel this answer is disingenuous, I think he feels he needs stability and he is asking for this precisely because it is an election year. Oh my GOSH he said he is hurt because we have lost a "culture of kindness." This is strange. I am confused. Why is it unkind to question the reason for renegotiating a contract two years before it is set to expire?  He said he needs the extension because employees are being attacked in Facebook posts.  That is a really puzzling justification. You need to listen to this. If the employees need something it is probably something like a raise, not the extension of the Superintendent's contract.  55:47

Chair Betsy Landers tried to defend this not based on morale or emotion, but as a "good business decision" 58:34

Amy Eoff pointed out that GMSD is four years old and this is the superintendent's third contract, if it passes. Suggested a three year contract, not reviewed in an election year would provide stability. 59:57

Can Citizens To Be Heard  legally be moved so it is heard prior to the vote on the Superintendent's comments? Citizens were previously notified that CTBH would be after the vote on the contract; thus, no one had prepared remarks about the subject. Now this worked out conveniently for certain members of the school board! They could claim to be responsive, without actually having to listen to parents arguing against the new contract. 1.31:46

Superintendent Manuel gave a report that noted various successes in the district, especially measurable items such as test scores. 1.41:13

Manuel, after stating that he wanted no child to be bullied, turned the meeting over to Mr. Bland, who, along with another staff person, gave a presentation on what GMSD does and will do about bullying. Please listen to this. They said they want to do something about bullying, but their plan does not call for an outside investigation. I would have to know a lot more about the task force that they have assembled. Exactly who is on the task force? How were they selected? There are parents on the task force, we are told. Who are they? Is the task force dominated by employees of the district, or did we reach out to community volunteers employed in the mental health fields? I have way many more questions about this than I have answers.  If this is a case of the administration investigating itself, as was done with Patrick Lawton simultaneously receiving the use of a car plus receiving a car allowance, then this is unacceptable, and unlikely to lead to significantly different outcomes. 1.58:10

Mr. Manuel reiterated that he does not want any children bullied. 2.04:35

Citizens to Be Heard:

As noted previously, Ms. Landers announced that Citizens to Be Heard was moved in the agenda to precede the vote on the new contract for the superintendent. However, since the public had no notice of the change, no-one spoke on the issue. Oddly enough, she repeats the information given to the Board by Valerie Speakman at the retreat--GMSD is not required to even have a Citizens To Be Heard!  Is she suggesting that it could be eliminated if parents don't tow the line? She goes on to say that if a lot of speakers want to talk on the same subject, they have to appoint one speaker. Why would this be brought up? Nobody repeated remarks of other speakers last meeting. Strange. She announces that five people had turned in the paperwork to address the Board.  2.08:21

Despite the announcement, eight people address the Board, which was certainly unexpected. The order of the speakers seems to have been intentional, with three parents speaking about bullying at the beginning of CTBH, and five GMSD employees extolling the virtues of their boss at the end.

Speaker #2 Lori Vincent- mother of boy who spoke at last meeting, After hearing other stories, she expected to hear that what happened to her son was wrong and would look into why policies weren't followed. That did not happen. She expected honesty, transparency, humility, did not expect to be accused of pandering to the media or hear in the retreat that 90% of victims were bullies themselves. Heard nothing about outside consultant. Not a disgruntled minority. District not behind her and other parents, parents are met with deflections 2.14:29

Speaker #3 Katherine Kittsman (sp?) Daughter bullied for four months, ruined her school year, clarify "abusive language" no clarity, some bullying behavior not put in right category, talks about research on psychological research and gives references for GMSD to use, she is a licensed provider of psychological services 2.18:14

Speaker #4 Carla Christian GMSD employee, educator, community member, saying thank you to everyone including superintendent, staff, faculty, Board, and students, she is a counselor as well, gets emotional, be solutions focused.  2.18:00

Speaker #5 Heather Fisher GMSD employee, thanks Jason Manuel and lauds accomplishments of district, applauds "cabinet", we have human resources, excellence always means building each other up,  2.23:51

Speaker #7 Lorrrie Tingle, GMSD employee Likes Jason Manuel, known him in many roles, no person more suited than he, love for schools, his soul intact, 2.29:01

Speaker #8 Joseph Bond, GMSD employee, principal of Riverdale School, got support from Mr. Manuel, he is amazing, parents with concerns know where to find him. 2.31.01

Two more individuals did not turn in their paperwork in time to be considered for Citizens to be Heard.

The discussion of Mr. Manuel's contract began. First the evaluation was discussed. (I discussed under Work Session)
2.33:19

Ms. Eoff stated that the Board is establishing a pattern of reviewing the contract every two years. Because of that, she says the contract should be for three years rather than four. She proposed an amendment to change the length of the contract to three years. Fails in a 3-2 vote. 2.50:51

Ms. Jones spoke at 2.54:08 and stated that there is no benefit to the Board to renegotiate the contract. Reiterated that Mr. Manuel specifically stated the last time he renegotiated a contract that he did not want to do it in an election year, yet he is asking that now. Furthermore, we need a strong leader, and a strong leader does not exhibit some of the behaviors that Mr. Manuel exhibits, such as saying that he is "broken" by comments in Citizens to Be Heard or on Facebook. Strong leaders do not publicly show frustration, and are responsible for their actions and those of his subordinates. We have a "culture of retribution." A strong leader embraces the private donors for projects and takes responsibility for making them happen. (note: there probably needs to be a separate blog post on this issue.) There is much more in this speech than I can put in the post so you need to click on the link above and listen to it. Any board member who votes for this contract is looking at past relationship with Mr. Manuel and is not looking out for the best interests of the district.

Ms. Parker's cringe-worthy speech is at 3.04.37. Many parents walked out and security was present to keep others in line after a very brief but noisy protest. "It takes two or more people to make bullying happen." I am sorry, after that I cannot take anything she says seriously, and the rest of my text would be blue if I said any more, but watch this for the fireworks value.

Ms. Eoff at 3.15:08 moved that the consideration of the new contract be put off for six months. Six months would be after the November election. Betsy Landers, who is up for election this year, took quite awhile to vote "no" on the motion. The motion failed, as did Ms. Eoff's other attempt at compromise, making the contract for three years.

The new four-year contract passed, in a 3-2 vote.

My take on this process, and the result: The length of the contract will probably have no detrimental effect for the district, although there is always that possibility.  As Ms. Speakman stated earlier, in the vast majority of cases, superintendent changes are smooth transitions. If the Board wants a new Superintendent, they notify him, and he would quietly begin looking for another job. Of course, if he could not find a new job, the school system could demote him to another position with different duties, and hire a new superintendent. Yes, the school system would be responsible for the large salary and benefits. Still, this result is unlikely. The vote was partially about fiscal responsibility, and partially about the message the Board wanted to send. In the end, the Board (or at least three members), sent the message that it wanted Jason Manuel as superintendent for the next four years.
Posted by Polly at 10:58 AM