Just when I think the drama of the Public Safety Education Commission is over, a new chapter begins. The resignations of the Chair, Al Gabriel, who failed in his attempt to remove Alderman Massey from his liaison position, and the Secretary, Denise Walls, who destroyed a public document, led to two openings on the Commission (see Commission Members Indefinitely Table Motion to Request Removal of Alderman Massey as Liaison). The BMA, in in its August 13 meeting, rejected the applications of two citizens, John Peyton and John Riley, who were seeking to serve on the PSEC. The vote was the usual 3-2 vote, with Rocky Janda, Forrest Owens, and Mary Anne Gibson voting against the appointments, and Dean Massey and John Barzizza voting for the applicants. Mr. Massey had encouraged both Mr. Riley and Mr. Peyton to apply for membership on the Commission.

Mr. Riley, the recipient of multiple decorations in his combat service, has law enforcement experience both in and out of the military. Mr. Peyton has performed a service for the City by starting a webpage entitled Developments in Germantown, TN and a Facebook group by the same name. Their applications and bios can be found here (click on agenda item 17).

The applicants were done in by an anonymous letter that transmitted to the BMA screenshots of remarks that they each had made in the closed Facebook Group, "Germantown, TN Bulletin Board" (hereinafter called the BB).  The screenshots included only their remarks, not the bulk of the conversations that led to the remarks. The aldermen who voted to reject these applicants expressed the view that the intemperate nature of their Facebook remarks  disqualified them from volunteer service on the PSE Commission. I placed the link to the BMA meeting and the notes I made of the aldermens' remarks at the end of this post. I also include Mr. Peyton's reaction to the events at the BMA meeting.

I am not able to quote the comments that these men made on the Facebook group, because the rules of the BB prohibit me from doing so. Every member of the group agrees to abide by the rules, which bans quoting remarks made within the group or taking screenshots of conversations and reporting them outside the group. This rule is strictly enforced. Their remarks were indeed intemperate, the kind of insensitive remarks that social media users, myself included, have occasionally made during heated discussions. Undoubtedly Messrs. Riley and Peyton wish they could claw back their remarks, and I know that feeling. Although it does not excuse the language, each was baited by individuals whom a number of people have blocked because of their behavior on social media. In fact, I never saw the remarks in the Facebook group because I have each of these members blocked because of past online behavior (and the total number of Facebook users I have blocked is only three). Each of these applicants also reasonably believed that, in keeping with the group's rules, his remarks would not be transmitted to third parties, much less sent anonymously to the BMA for the purpose of torpedoing their efforts to serve the community. Still, I am not denying that their remarks were inappropriate. Let this be a lesson to all of us. Keep those lips zipped, and those fingers away from the keyboard when provoked.

Notwithstanding the inappropriate remarks, I detect more than a tad bit of political hypocrisy in the 'holier than thou' attitude expressed at the August 13 BMA meeting. Messrs. Riley's and Peyton's real sin, I submit, is not their intemperate Facebook remarks, but the political positions they have taken. Both are vocal opponents of the overbuilding of apartment complexes. Opponents of the Mayor are not welcome on the commissions. Both of these men are vocal supporters of Mr. Barzizza's mayoral candidacy. Mr. Peyton recently filed a police report regarding the political signs that were stolen from his yard. (The  Neshoba North neighborhood had Barzizza, Sanders, and Brown signs stolen one night last week. Sarah Freeman, another active administration opponent, also filed a police report for the same offense. In her case, her garage was entered and a magnetic sign stolen from her car. I seriously doubt that it was a coincidence that their two homes were targeted in this criminal act.)

Two Massey-supported applicants for a volunteer service position get way-laid by an anonymous letter and, voila, Massey's opponents on the BMA are given a free pass to thwart their nemesis, in the process invoking high-minded appeals to the "community of kindness." Give me a break. What happened to these and other lofty ideals when Mr. Palazzolo, in his alderman race in 2008, used a sample ballot that falsely indicated that he was endorsed by the Republican party (see my 4-22-17 blog post)? And somehow I must have missed the aldermen's praise of civic virtue when the City Administrator, after it was discovered that he had been receiving a car allowance while simultaneously using a city-owned vehicle, was allowed to keep his job without a proper investigation. (see October 20, 2016 blog post). And let's not forget that the City staff purposely hid from the neighbors a covenant on a parcel in the Forest Hill Heights area, failing even to take the simple step of checking with the City Attorney (see 4-13-18 blog post) to ask about its enforceability. Is this the "community of kindness" Alderman Janda is talking about? I could go on, but I think you get the drift. Bottom line: These applicants would not have been turned down if they had been supporters of the Administration.

What else will the citizens' have to endure before November 6? 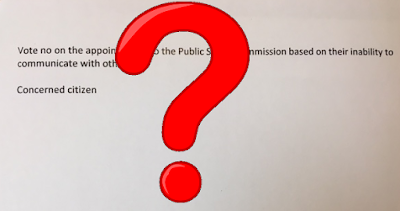 Before signing off, I would like to make what ought to be an easily heeded appeal: Please, can we stop the practice of anonymous mailings and postings? For those who may have forgotten, we have seen this play before. Recall for example that the employer of Roland Mittag (administrator of the BB Facebook group) received the following anonymous email: 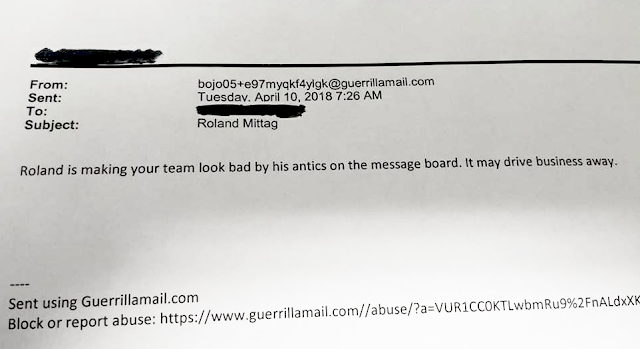 I had to roll my eyes at that. 🙄 Never have I observed any "antic" on the part of the very able Mr. Mittag.  I am sure Mr. Mittag is thankful for having an understanding boss.

The BMA Discussion of the Nominations

And, as promised, below is the discussion in the meeting yesterday.

Forrest Owens said that he had been “provided some information tonight” and he preferred not to get into the deep discussion, and requested that Alderman Massey consider making two different appointments.

“not the type of behavior that we would like to see a volunteer  of the City exhibit” “It begs the question of whether they can work well with commission members.”

Janda in reviewing many comments he has seen them make, he does not consider them part of the “community of kindness.”

Barzizza—“It goes both ways. Both sides made disparaging remarks to one another. I think the entire issue is blown out of proportion.” Calls for everyone to please settle down, we have a long way to go until November 6.

Massey- Blindsided that his appointments would not be approved, The Mayor’s appointees decided to resign “They destroyed the public record and that was a problem. “It is dangerous for us to base our decisions on political discussions that occur among individuals in the community……….(snip)………..it is a slippery slope.?  He lists all the medals and awards (Army Achievement Medal, Army good conduct medal, etc.) of Mr. Riley ”He served our country proudly”.  Year after year people put the same people on commissions, their friends and family  The information--“It was from an anonymous person who selectively took quotes from a Facebook page, and these quotes are fairly mundane. It was an argument between two citizens about politics”  He notes that aldermen only got these quotes and not the entire conversation, this came too late in the afternoon to look up the entire threads that led up to the quotes. What is going on is attacking these people for expressing viewpoints that are unfavorable to the three aldermen.

Barzizza “I look at this whole matter as political hype and I think it needs to cease.” “I agree with Alderman Massey on his comments. We do not even know where this came from and that should not have any bearing on the merit of the individuals. “Who are we to judge what really happened in that thread, throughout the entire thread.” Tone down the rhetoric, speaks of signs that suddenly appear, and suddenly disappear.

Subsequent to the BMA meeting, I asked Mr. Peyton about what had taken place. He stated that he no longer felt like volunteering for the City and that he had rescinded his application. He gave me a copy of his letter. 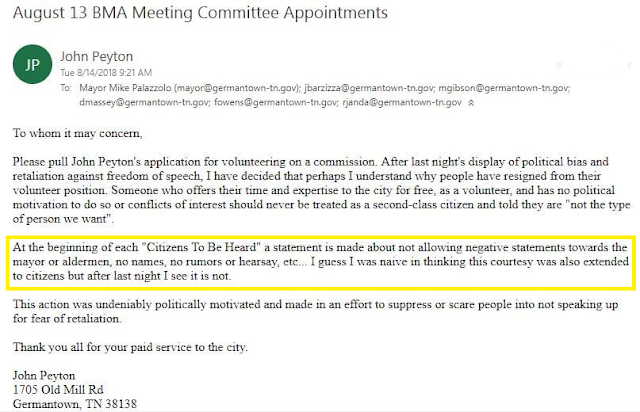