Vacancies Rise in Luxury Apartments--Boom and Bust? And Tax Incentives for Apartment Buildings in Our Future? 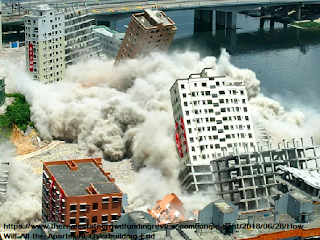 In my June 7 post, Macro Trends in Apartment Buildings Points to Oversupply, I explained why current economic conditions have generated an overabundance of luxury apartments. The Mid-South area is not a trend setter, but a trend follower; therefore, by paying close attention to nationwide trends, we can avoid the pitfalls that have beset other markets. If, on the other hand, we ignore the signals and turning points in the macro trends, we will be acting foolishly. I have recently looked at some new data on vacancy rates, and it confirms my June 7 assertion that there is a nationwide trend of luxury-apartments overbuilding.

There is indeed a housing shortage in certain parts of the country. This shortage, however, is not in luxury apartments; rather, it is in lower-cost apartments.

One would think, therefore, that developers would be building lower-cost apartments. Instead, however, they are flooding the market with luxury apartments. As I explained in my June 7 post, this is because developers are focusing too much on costs and paying too little attention to actual demand.

This is not "Field of Dreams". Developers cannot economically proceed on the premise that, if they simply build luxury apartments, "the renters will come." Have those taking the risk in luxury-apartment projects (not always the developer) forgotten the housing crash of 2007 and, in particular, the false over-confidence that triggered it.


I recommend you take a look at Ian Ippolito's recent article, How Will All the Apartment Overbuilding End?  Although Mr. Ippolito's purpose is to offer investment advice, his views are germane to the question of whether continuing to build luxury apartments is economically sensible.


Whenever you see a graph like this, showing that long-term trends have shifted dramatically, you know there are significant dysfunctions in the marketplace.

Are Millennials the New Baby Boomers?

"But then, it all came to a very quick and catastrophic end. Boomers got tired of apartment life, wanted to start families or were sick of paying rent. So they moved to single-family homes."

My take on his comparison is that the "millennials" of today are akin to the "baby boomers" of that earlier period. As did boomers, today's millennials will likely tire of luxury-apartment life. Developers are, in my view, incorrectly assuming there are more millennials seeking luxury apartments than is actually the case.

Please see Millenials are Buying a Lot More Homes Than You Think (discussing the popular myth that millennials are destined to be a generation of renters).

And, see also the following excerpt from  From Their Parent's Basements to Dream Homes; Millenials are Skipping Starter Houses:

By renting or living with their parents for years, many Millennials in their mid-30s can now afford pricier houses because they’ve socked away more money and moved up to better jobs, Swonk says. And they need the extra space because they’re finally getting married and having kids after deferring those transforming events. Also nudging them into more lavish houses is a severe shortage of lower-priced starter homes.

If you are interested in reading more on the 1969-1972 period see National Real Estate Investor link).


Mr. Ippolito, I should point out, does not contend that the current overabundance of luxury apartments has reached the crisis glut of the "baby boom" period. He does believe, however, that, if the trend depicted in the above graph continues, a "major adjustment" is likely in the 2022-25 time frame.

PILOTS and Other Tax Incentives Now Allowed in Shelby County

Just recently, the Tennessee General Assembly passed a law that extends to apartment projects located in Shelby County the benefits of PILOTS and TIFs -- two forms of tax rebates/tax incentives that incentivize development.  The addition of these taxpayer-funded benefits will likely exacerbate the oversupply of luxury apartments in Shelby County.

In its May 31 edition, the Memphis Business Journal, quoting an official familiar with the legislative process, points out that this legislation, which was sponsored by Brian Kelsey (Germantown) and Kevin Vaughn (Collierville), most likely  "was not carried for just an exercise. I’m sure there is a project out there that will utilize it.”

Two likely candidates for this newly enacted preferential treatment are, I believe, the Carrefour project and the Arthur property.

Massive Mixed Use Project Tabled Until After the Election

Carrefour at Kirby Woods Asks to be Exempt from Apartment Moratorium

And, here's another thing. We are losing population in Shelby County. Do we need a plethora of apartment buildings, luxury or otherwise, in Germantown when our county's population is declining?

Since 2012, the population in Shelby County has decreased from 939,425 to 936,961. Because births in the county exceed deaths, the population decline is attributed to movement of people away from the Memphis area. I don't see how can we count on millennials to satisfy the influx of luxury apartments when there is net population migration from our area. Because of this population decline, the luxury-apartment bust, when it comes, will likely hit our area harder than others.

Given an overestimated forecast of millennial demand, new tax incentives that will increase supply elsewhere in the County, and a declining population, does it really make sense to continue building luxury apartments in Germantown?
Posted by Polly at 9:09 AM