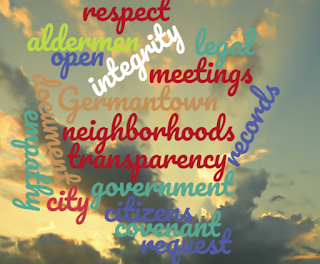 It is a sad state of affairs when an elected official must resort to an open records request to obtain information relevant to the issues upon which he is required to vote. Elected officials, in this case an alderman, should not be forced to jump through hoops to find important documents. But that is exactly what happened in the saga that I describe in this post. Certain of our City officials, it seems quite clear, have forgotten that they work for us, the citizens.

The document at issue here substantiates the claims of Forest Hill homeowners that a promise was made to forego, for a specified period, certain rezoning of the Reaves property.  Little did the citizens know, while they kept insisting to the City the promise had been made, that the document, a covenant signed by the owners of the property at the time, was sitting right there in the City's own files! But for Alderman Dean Massey's open records request and ensuing fortuitous developments, we would never have known about this covenant. It was because of the discovery of this covenant that the third and final reading of the proposed ordinance to change the zoning of the Reaves property, originally scheduled to be held on March 26, was delayed until this Monday, April 9. This delay was discussed briefly in Forest Hill fights back at last night's BMA meeting.

Now that the truth has been uncovered, how will the BMA decide the zoning issue currently before it - namely, whether the Reaves property should be rezoned from one-acre estate lots to one-third-acre residential lots? I guess we will find out Monday night on this matter's third and final reading.

I will now attempt to reconstruct the events leading to the discovery of the covenant and the decision to delay the rezoning vote:

THURSDAY, MARCH 22: Faced with the third and final reading on the Reaves property rezoning issue, coming up at the Monday, March 26 BMA meeting, Alderman Massey, on his “Massey for Germantown” Facebook page, posted a “document dump” of a portion of the material that he obtained through his open records request. 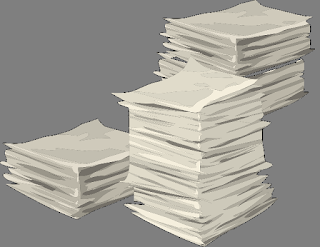 Unlike most other city officials, who rebuffed Forest Hill residents' claims that they had been promised that the subject property would not be rezoned, Alderman Massey had actually listened to them. He felt an obligation to investigate his constituents' concerns. Suspecting that the City had not been forthcoming, he had pursued an open records request. Posting the documents on Facebook on Thursday was necessary because Alderman Massey had received a massive amount of information, and he did not have time to research everything. In his post, he put online for citizen perusal those documents he considered to be the most promising.

One particular document, a portion of what then appeared to be an unsigned covenant dated December 2005, caught the attention of a number of Facebook readers. This partial document appeared to be a promise by the previous owners of the Reaves property (the Rulemans) to forego, for twenty years, any further rezoning, in return for their neighbors' agreement to withdraw opposition to certain zoning changes that the Rulemans wanted to pursue at that particular time. Because this covenant is one that "runs with the land", it was to be filed with the Shelby County Register.

When I first saw the document on Thursday, I realized that, if this covenant were actually enforceable, it would be a game changer for the soon-to-be-proposed Duke development on the Reaves property. This was clearly an issue that the citizens of the Forest Hill area needed to examine with their neighbors and attorneys. 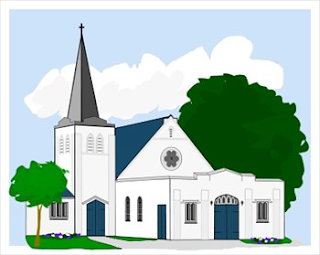 SUNDAY MARCH 25: At church on Sunday, Burt spoke with his next door neighbor, a long-time resident of the area, about the document. As it turned out, Burt's neighbor recalled the covenant, and was subsequently able to locate a version of the document with more pages attached.

At this point in the timeline, those of us who had seen the covenant did not know if the Rulemans had signed it. It was only later that we learned that Alderman Massey, upon his further review of the documents he had obtained from the City, had been able to find the Rulemans' signatures. As signatories often do with legal documents that go back and forth between lawyers, the Rulemans had signed their names on a separate signature page.

At the end of this brief timeline, I will link the document and briefly discuss its provisions. 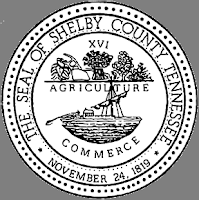 Burt, Alderman Massey, and others  determined that the covenant had not been filed by the Rulemans, the parties responsible for filing the it with the County. [Note: Covenants like this are recorded because subsequent purchasers of the property must be notified of the restrictions so that they will be bound by the terms of the covenant.]

Burt called a City official and asked that the BMA defer that night's vote in light of the recent discovery of the covenant. (At the time of this call, Burt had not yet become aware that the Rulemans' signatures had been found.) This official told Burt that the covenant was not legally enforceable, and said that the vote would go ahead that evening. It was Burt's impression from this conversation that the City had only recently been made aware of the covenant from either the Massey for Germantown Facebook page or Burt's call to this City official. In fact, as we now know, the City had surely long been aware of the covenant, as evidenced by the fact that Alderman Massey had obtained it, including the page with the Rulemans' signatures, directly from the City's files. This is borne out by the discussion that took place that evening during the Executive Session:

What we hear, with some difficulty, in this audio:

1.City Attorney David Harris stated that the covenant had just come to his attention. He felt that the best thing to do was to defer the vote on the rezoning of the property until all parties could assess the legal ramifications of the covenant.

2. Alderman Massey then revealed that he had obtained the signed covenant directly from the City’s own files, and asked why the residents had not been informed about the covenant before their votes on the first two readings.

3. Director of Economic Development Cameron Ross answered Mr. Massey by saying, first, that the Rulemans had never built their planned subdivision on the property, and, second, the covenant had not been properly filed with the County Register of Deeds.  Mr. Ross then offered his opinion that the covenant was a mere “theoretical” document.

As a citizen, I find Mr. Ross' response to Alderman Massey quite troubling. I say this for three reasons. First, Mr. Ross is not an attorney, and, as best I can tell, he never consulted with the City's attorneys until the document was discovered by Alderman Massey. Second, Mr. Ross should have told the aldermen about the existence of the covenant, regardless of his view that it was merely "theoretical." After all, the residents had insisted all along that a promise had been made that the Reaves property would not be further rezoned. Mr. Ross should have disclosed the existence of the covenant, whether or not he believed it is enforceable. Finally, the aldermen absolutely should have been made aware of the covenant, regardless of whether it turns out to be unenforceable. The Aldermen's vote on an issue of vital importance to their constituents might well have been influenced by the fact that those constituents had received a firm promise on which they had reasonably relied.

TODAY:  The document's legal status is now in limbo.

Here is a link to the covenant—

For ease of reference, here is one relevant page: 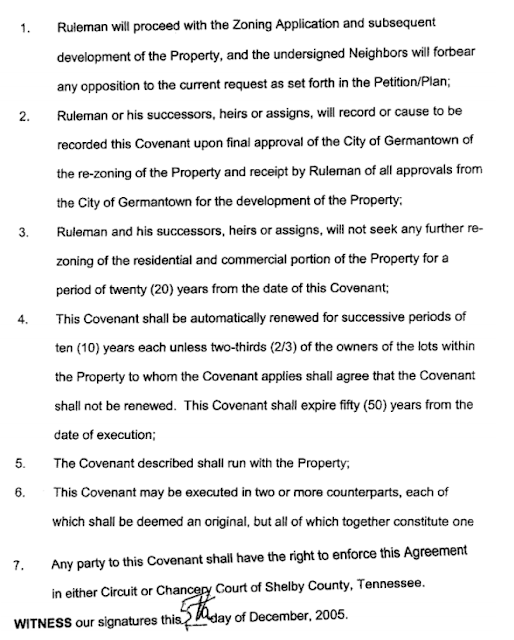 BRIEF DESCRIPTION OF THE COVENANT:


As stated previously, a covenant like this one "runs with the land." This means, as I understand it, the covenant's promises apply not only to the owner signing the covenant, but also to all subsequent purchasers of the property. The covenant in question states that the Rulemans will not seek any additional rezoning for at least twenty years if the residents withdraw their opposition to the particular zoning the Rulemans were contemplating at that time and if the Rulemans, in fact, were granted the rezoning. Additionally, the covenant states that between years 20 and year 50, two-thirds of the residents of the area would have to agree to a zoning change in order for a rezoning to occur. At year 50 (2055), the agreement ends.

After obtaining the rezoning they were then seeking, the Rulemans closed on the property in February 2006. The zoning changes that the Rulemans obtained as a result of their agreement with their neighbors included a commercial project (where Millenium Furniture is now). The Rulemans never completed the residential subdivision to which the residents had dropped their objections.  The property was later purchased from the Rulemans by Mr. Reaves.

Unfortunately, the Rulemans failed to record the covenant. Whether Mr. Reaves knew about the covenant at the time he purchased the property, whether the covenant is enforceable in any event, and whether the Forest Hill residents have a claim against persons other than the current owner are questions that I cannot answer. I do know, however, that the residents, acting in good faith, received a promise on which they were counting. It is not their fault that they find themselves in this position. Surely, the aldermen who voted for the change on the first two readings - Aldermen Owens, Gibson, and Janda - will, now that they have finally been made aware of the covenant, pay heed to these facts when they decide this issue on Monday evening.

One would think that, in light of the covenant given to the Forest Hill residents, these aldermen would need a particularly strong reason for taking an action that squarely contradicts the promise the residents received in 2005. And, as I have previously pointed out, no such strong reason exists. As I explained in Forest Hill Reaves Property - Costs, Benefits, and the City's Fiscal Health, the findings of the City's own taxpayer-funded TischlerBise Analysis demonstrate that there is no sound fiscal reason to increase the residential density in the area. Quite the contrary! Furthermore the City has undertaken no other study in an effort to show a fiscal justification for increased residential density.

I will be very interested to see how these three aldermen vote on Monday evening.