When Truth is Stranger Than Fiction--GMSD Scandals 101

Our illusions about our City and our "Excellence Always" motto have been severely tested in the last week by the various revelations about our GMSD school system. I don't cover the school system much in Shining a Light, due to lack of time. And now, I don't need to cover it, because the news channels and newspapers have done a great job making Germantown the laughing stock of Shelby County. By the way, we rightfully earned it!

Since truth is stranger than fiction, I will just put some of the various news sources here, mostly in chronological order. I won't comment further until we know more. I feel I have to report on this, even though I have nothing meaningful to add to what has already has been reported. This is an "accumulation of information" post, for posterity.

First, on April 19, it was revealed to us that an unnamed teacher at Houston High School was under investigation. All the students at Houston apparently knew everything about this, but nothing had surfaced in the news about the details. 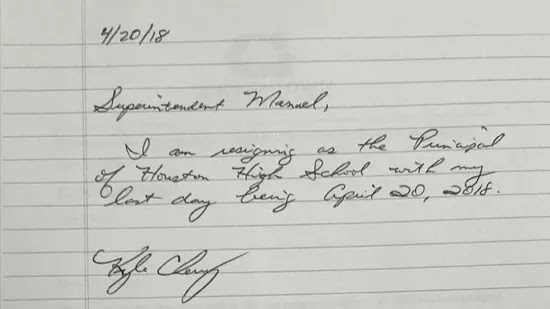 On Monday, April 23, the Commercial Appeal reported that Kyle Cherry had abruptly left his job as principal the previous Friday. He cited overwhelming stress as the reason for his departure, according to GMSD, although his hand written note did not include that revelation.

The name of the teacher under investigation is revealed on April 26. William Rayburn, the Tennessee Teacher of the Year for the Tennessee Governor's School for the Arts, was accused of kissing and touching students. I have learned from other sources that Mr. Rayburn was hired after leaving Briarcrest School under questionable circumstances. The April 11 memo from Mr. Manuel: 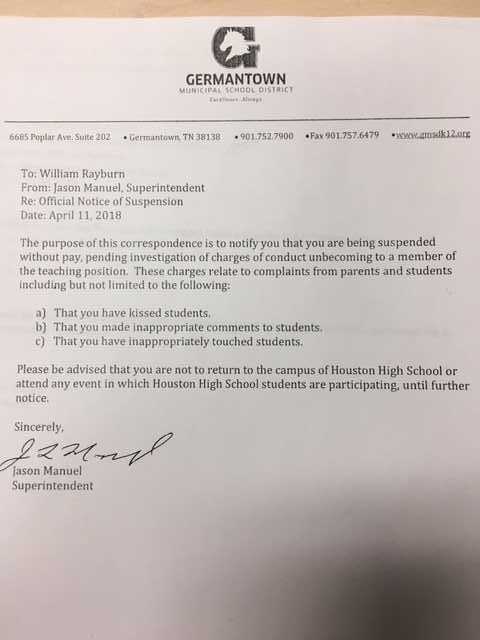 Later on April 26, some jaw dropping information was revealed about an incident that occurred August 1, involving Kyle Cherry. The police were called by the 19 year old daughter of a co-worker (really a subordinate) of Mr. Cherry. She reported strange noises and a prowler. The police came and found flip flops, a ladder up to her window, and a cold beer in the back yard. She claimed that the person looked like Mr. Cherry, and the police report stated that the mother tried to shush her daughter from talking about Mr. Cherry.

It was revealed that there was an "internal" investigation of this matter, which involved a reprimand which was essentially a warning not to do this again, signed by Mr. Manuel. 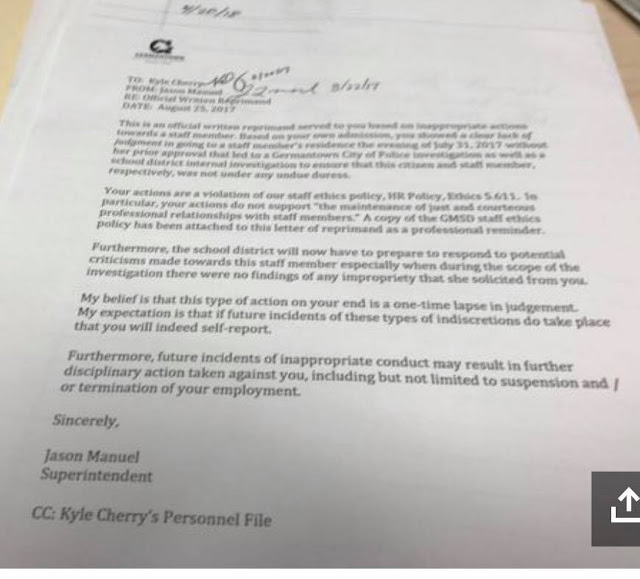 Mr. Cherry says he was trying to get the attention of the girls' mother. He said they were more than just friends, but in all reports of the incident they deny having a sexual relationship.  She and Mr. Cherry had had dinner together the same date as this incident. The police report states that the mother did not want to file charges because of fear of losing her job.  Mr. Cherry apologized to the woman the next day and said he was inebriated at the time of the incident.

Channel 5 was also coming out with various reports on these incidents. Mr. Cherry agreed to a couple of interviews where he explains that alcohol and stress created the situation in August.

7.  Investigation into the Former Principal and A suspended Teacher At Houston High School

The above is yet another news story about the incidents. It reveals that Kyle Cherry received $25,000 severance pay when he left. We were told by a newspaper reporter that Jason Manuel stated that was money that was available when any high level employee chooses to leave the district.

Mr. Cherry says he has been contemplating resigning for months, and his resignation has nothing to do with the investigation of the choir teacher.

9. Here is the communication that parents received from Jason Manuel about the investigation of the teacher, dated April 26: 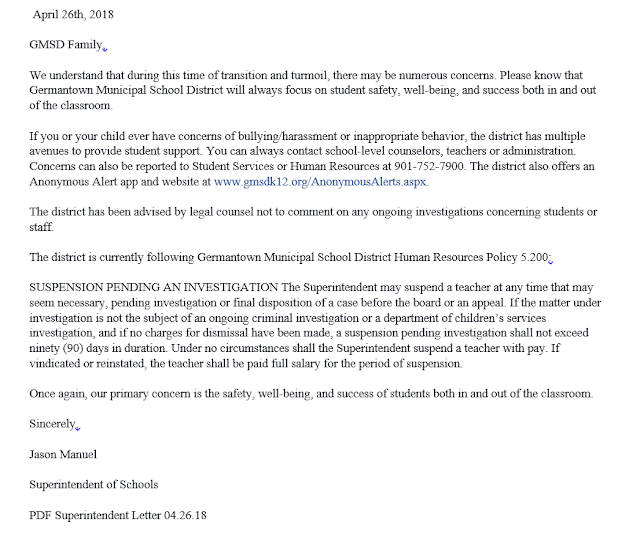 GMSD has stated that the "kissing" of students by Mr. Rayburn was on the forehead of students after choir competitions. The other allegations are being investigated.

Apr. 27--From the above we learn that Superintendent Manuel would have to "check the records" to find out when he first learned about allegations against the choir director, but he stated that he takes allegations like this seriously. He says they were reported to Germantown Police and to the Department of Childhood Services. WREG said the Germantown Police had no record about Rayburn, and he stated it was told to the policeman assigned to the school. He said he would contact the police directly.

Apr. 28 Last Update: When asked about the $25,000 in separation money given to Mr. Cherry:  "Our legal counsel has now recommended that we get a separation package or agreement really to protect the district from future litigation or concerns,” Manuel said.

April 27: ""We conduct rigorous evaluations of all our administrators, and I believe that Mr. Cherry was having difficulty balancing his job expectations with his personal life," said Superintendent Jason Manuel."

For my subsequent posts on this matter, please see

Incompetence Evident in Handling of GMSD Scandals
Posted by Polly at 11:16 AM