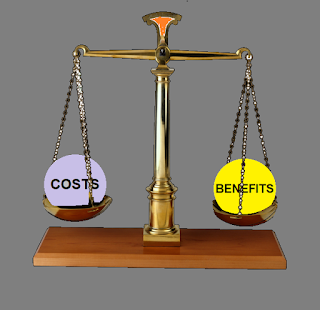 Governmental decisions, just like those made in the private sector, should be grounded in appropriate decision-making models. The gold standard is a cost/benefit analysis.

In their recent decisions regarding future residential growth, the City's leaders have, from what I have learned, apparently paid no heed to a cost-benefit analysis, or any other sound model. This was confirmed for me by the City's response to a recent open record's request. I will give you the particulars concerning this request below, but first I should provide a little background.

In my blog post of March 24, No, New Dense Development Will Not Help Keep Our Property Taxes Low, I discussed the July 2016 $85,000 taxpayer-funded TischlerBise Fiscal Impact Analysis. The TischlerBise analysis shows that residential development of all types negatively affects the City's fiscal health. In a subsequent post, Forest Hill Reaves Property, Costs, Benefits, and the City's Fiscal Health, I used the findings of the City-commissioned TischlerBise analysis in a model that focused on the proposed zoning change for the Reaves property on Forest Hill Road. The third and final reading for this proposed zoning change will likely take place at the coming BMA meeting Monday. The model I presented demonstrates, per the findings of the TischlerBise analysis, that the negative fiscal impact of the smaller-lot zoning change under consideration is greater than the negative impact that results from maintaining the current estate-sized zoning. I therefore concluded that, accepting the findings of the $85,000 taxpayer-funded study, keeping the existing estate zoning for the Reaves property would be best for the City.

The City's constant conclusory refrain extolling the virtues of mixed-use development and the buying habits of millenials is worthless when not supported by solid evidence. Sound bites in praise of "walkability" and "live, work, and play" are no substitute for elementary fiscal analysis.

Now, I will turn to my open records request:

Here is how the City responded:


As you can see, the City checked the box that provides that "no such record(s) exists or this office does not maintian record(s) responsive to your request." I can only conclude that the City is eschewing the $85,000 taxpayer-funded TischlerBise analysis because it does not like its findings. Furthermore, it seems quite clear from the absence of any records submitted in response to my request that the City is not using any alternative analysis.

A municipality's failure to apply sound fiscal priorities can lead to a bad outcome. Take, for example, Carmel, Indiana, a city that our leaders touted as a model for future development.

Indeed, our leaders were so impressed with Carmel that they took a field trip there in 2016.  I remember the photo ops!

A Look at Carmel, Indiana and Germantown Smart Growth

“The city still has a few pockets of potential land to develop into residential uses,”  [the Mayor] said. “But most of our future growth in populations is more likely to come from vertical expansion in the central part of our city as we encourage mixed uses and multiple levels in new construction designed to create more residential density and vibrancy in our rapidly growing redevelopment areas.”

Note how Carmel's mayor, in the above quote, is pushing for high-density residential development. Sounds familiar, doesn't it?

You may be wondering how this has worked out for Carmel. While its citizens like the taxpayer-funded amenities, Carmel is now ill-positioned to weather any economic downturn, and its high debt level (close to a billion dollars) has led to  a downgrade of Carmel's credit rating.