Citizens might wonder why a single appointment to the Industrial Development Board (first discussed in the January 22 blog post) is so important that I am shining a light on this issue for the third time in a week. Today I attempt to explain that in the simplest possible way. To do that I first need to briefly review "Smart Growth".

Smart Growth, adopted in 2007, allows for special zoning classifications in certain areas, ensuring denser development in our land-locked community.  We are following the recommendations of Smart Growth America.

Yet I have not heard one single mention of the significant reservations about the Tax-Increment Financing administered by IDBs which are listed in a paper in the Smart Growth America website. Why not?  Are our city leaders even aware of these reservations?  Or are they cherry picking what they like about Smart Growth America, and ignoring articles that the organization deems worthy enough to include on the website?

Recently, the possible use of TIFs in Germantown has been in the news:

Again, TIFs are the responsibility of the IDB, which is comrised of citizens appointed by the Mayor. Elected officials cannot have much oversight over the IDB because of the need for the bonds to be designated as "revenue" bonds, and not backed by the full faith and credit of the City.

Let's look at a few things that the paper on the Smart Growth America website has to say about TIFs: 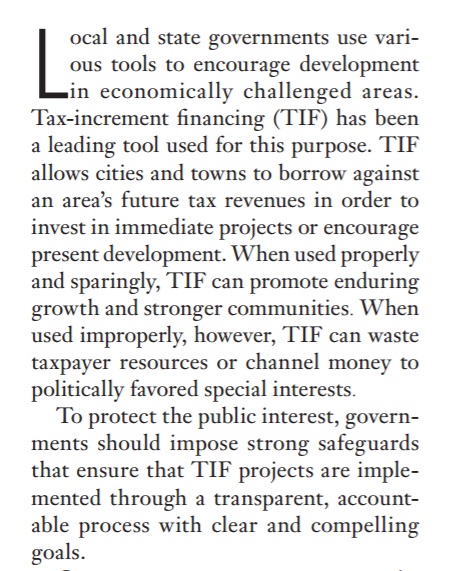 Please note that TIFs are meant to spur redevelopment of areas in difficult economic straits. 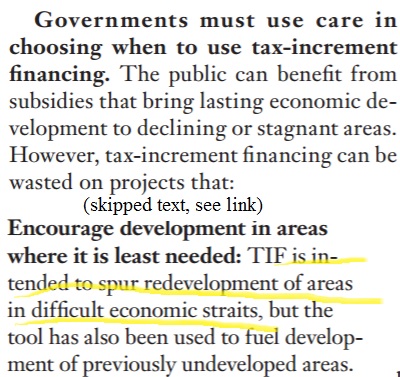 Even the use of TIFs to fuel development in previously undeveloped areas is deemed inappropriate in the paper.

Note added 1-28: TIFs in Memphis have been used to encourage redevelopment in marginal areas of town, such as around Graceland, Highland Row near U of M, and the Greenlaw area of downtown.  These are all in areas of needed redevelopment. Memphis has not used TIFs in areas of prime real estate such as near Laurelwoood.

Exactly which portion of Germantown are in economic straits? I cannot quickly think of any. I am not saying that there are no such places. All I am saying that the IDB should limit its use of TIFs to areas which truly need a boost to start development or to help enable redevelopment. But again, it is not just I saying that. IDB should at least roughly follow the recommendation of the academic paper endorsed by Smart Growth America, and limit TIFs to economically challenged areas.

What are the consequences of not limiting TIFs to economically challenged areas?

Among the possible adverse consequences attributed to TIFs are the following (listed in the paper):

1. Failure to achieve public goals.  By definition, TIFs take money away from schools and parks (unless the property tax is raised to make up the difference).

2. The process of TIFs, which often take place without public awareness and input, create the opportunity for favoritism and corruption.

These and other adverse consequences are fully discussed in the "Executive Summary" of the above link.

I see no reference in this new policy to the types of areas that are appropriate for TIFs.  Such distinctions should be part of the TIF policy. Since they are not, we may be likely to experience the adverse consequences.

As I discussed in my January 22 post, the public's best opportunity for oversight is the BMA's approval or disapproval of the Mayor's nominees. It is essential that IDB members be individuals who will use TIFs in the manner intended.