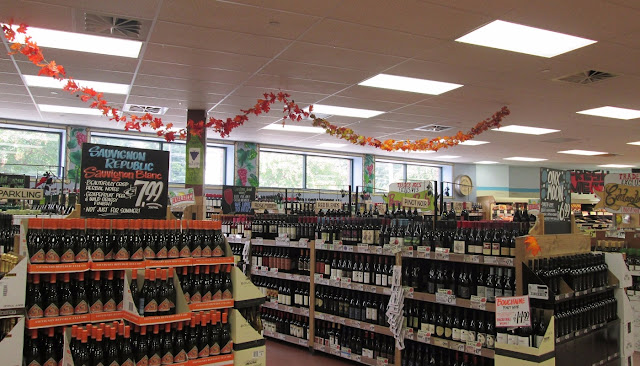 The pictured establishment could now be allowed in T4 zoned areas in Germantown if the City implements zoning ordinance changes that were characterized by Cameron Ross (Germantown Economic and Community Development Director) as a "general maintenance and review of zoning codes and processes". Ho, hum, just an inconsequential change to your residential neighborhood. No need, felt the City, to let us know about minor changes like bars being allowed directly across the street from single family homes.

This zoning change is up for a public hearing at the next BMA meeting on January 9.  An earlier "public hearing" gave little notice of the magnitude of the changes, and the public is now being given another opportunity. See my previous blog posts for more detailed discussion of the history:

Major proposed zoning changes, a "public hearing" and nobody came

Exactly where are Germantown's T4 neighborhoods? Here are just two of them, and I will use one of them as my main example:

The T4 neighborhood adjacent to Germantown Heights abuts single family residences where kids ride their bikes to Riverdale School. The school is just west of the area, off Neshoba. Under the proposed zoning changes, there would be NO buffer zone between these homes and establishments like the one pictured.

Neshoba North is another residential neighborhood directly affected by this same change. Undoubtedly the absence of a buffer zone would negatively impact the value of the homes in these areas.

When this triangular-shaped property was originally zoned T4 under Smart Growth, residents fought it, but although they were unable to stop the T4 designation, they at least obtained from the City assurances that the new T4 zoning would both prevent bars and liquor stores from coming to their area, and serve as a buffer zone between the residential and the commercial (T5) areas. Now, in a "bait and switch" fashion, the City wants to retract these assurances.

If the citizens of Germantown want to allow bars and the like to abut residential areas, so be it. But shouldn't we have greater transparency about this? And discussion?

These proposed major changes are hardly routine. They should have been highlighted by the City.  That would have been “true” transparency.

While Sarah Freeman was able to uncover other significant changes earlier, she was able to uncover this particular change (allowing bars and liquor stores in T4 areas) only this week, so deeply was it disguised in the red-lined changes of the proposed zoning ordinance provided to us by the City.

This expansion of permissible T4 commercial activities was noted neither in the BMA meetings nor the Planning Commission meetings.  Ms. Freeman happened to notice the above table from the City's link to the red lined changes, and she called Cameron Ross to ask the meaning of it.

It is preposterous that changes as substantial as this were characterized by Ross as merely "cleaning up the language" in the zoning ordinance. See Commercial Appeal article

The other T4 area shown in the image above is immediately east of Thornwood. The development most affected is Somerset, the new expensive custom homes being built by Regency Homes.

There are other T4 areas scattered around, mostly off Poplar and Poplar Pike. Here is a rather small version of the current zoning map. If you click on it to enlarge it you might be able to read it. 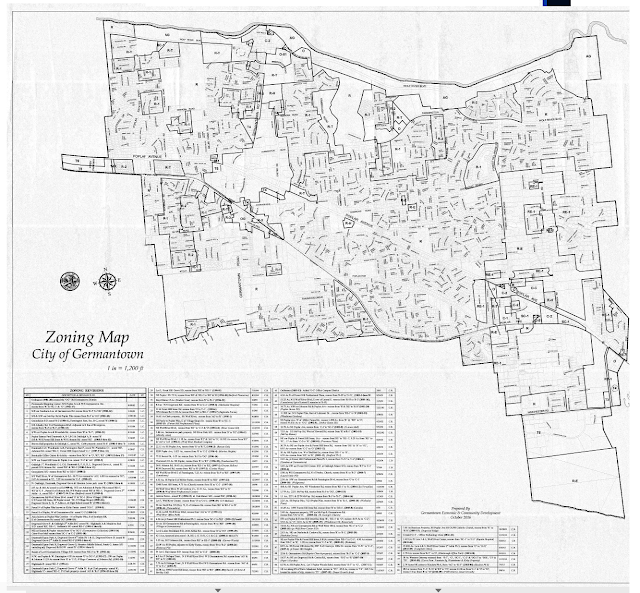 Why, you may ask, doesn't the City have the most current official zoning map on its web page? Cameron Ross claims that technical reasons prevent the City from posting it; however, Sarah Freeman bought a hard copy of it from the City for five dollars, and I had that copy scanned for seven dollars. Between the two of us and the scanning services of FedEx Office, and the free services of Google, this blog now is able to give you the transparency that the City has been unable or unwilling to provide.

Download for Most Current Germantown Zoning Map
Now, this is a pretty big file, but I am puzzled that someone who is not particularly tech savvy (me) can provide this and the City cannot. If they are worried about security, why not establish a separate cloud account for public documents? I do not claim to be tech savvy, but this does not seem like rocket science. How can the zoning document even be interpreted without access to the most current zoning map?

Importantly, a precedent has been set and a protocol has been established for considering changes in zoning with respect to alcohol. Any change should be considered separately from other ordinance changes, not as part of a group, where it can be easily missed, by citizens and aldermen alike.

Our administration and our elected officials should be following the precedent set when three readings took place which clearly stated what was being voted on, in 2013-2014:

Please note that this change was not buried in a large document in an incomprehensible table.


I have touched here on just one of the many substantive proposed changes in the zoning ordinance here, and, in summary, not only was this change not mentioned during either the meeting of the Planning Commission or the BMA meeting, the change was also buried in a table in a lengthy document  and the most current zoning map was not provided to the public. Let's bring back the transparency we had in 2013-2014!

1. Garage "lighting" would be changed to "lighting fixtures" in the T4R neighborhoods. This seems to affect only Nottoway. If Gill Properties was to sell its interest in Travure, then the next owner could build a garage with lights shining into the Nottoway homes, as long as the lighting fixtures were obscured.  Why this has to be rewritten is a complete mystery. That should be a question asked of the administration.  Whose idea was this?  It makes no sense to change this because this only affects one property.  If it applied more generally, why would we want commercial garage lighting to intrude on neighborhoods, when it can easily be blocked?

2. With warrants, one story buildings will be allowed in the Smart Growth areas, a major change from the "dense" retail that was envisioned with Smart Growth. This is a larger question.  Does Smart Growth itself need to be revisited, due to market forces?

Citizens who care about these zoning issues should contact their aldermen, and attend the public hearing Monday.

Please urge the alderman to vote against this group of substantive zoning changes, which have been grossly misrepresented as "general maintenance."  Each one merits its own separate vote and discussion. To do less is to obfuscate, be opaque as opposed to transparent, and to break with established protocol.