Back to School--Part 1--History of the Start Time Issue 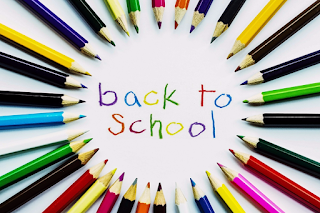 I will use this blog to shine a light on tiny slices of the brief history of our Board of Education. I would not be able to do this without the wonderful parents who serve as watchdogs of that organization. Many of them post to this closed Facebook group (just ask to join)--Germantown Municipal Schools Discussion Group. As an example, one of these watchdogs maintains a spreadsheet tracking every single vote of the Board, by Board member, since its inception in 2014.

UPDATE ON THE INTERVIEWS FOR MR. DELY'S SEAT:

One particular group that deserves special consideration is JAM in Germantown (Just a Mom in Germantown), a group of mothers who attend each meeting, take extensive notes, and post to a blog. The first of JAM's posts that I would like to highlight is one I have been waiting for since September 4, when I discussed the candidates seeking to replace Mark Dely on the Board of Education. Look for JAM's September 8, 2016 entry here--Filling Mark Dely's Shoes. While the rest of us were either sleeping in, drinking coffee, or off to work, these Moms showed up for the interviews of the candidates by the Mayor and aldermen that took place the preceding day, took notes, and reported back to us. They are definitely not part of what I have called the “Snickers” crowd (those of us who, like me, would rather eat Snickers bars than attend meetings.)

The next week, on September 12, the Board of Mayor and Aldermen met and voted on Mr. Dely’s replacement.  It was announced that Betsy Landers will be "filling Mark Dely's shoes."

Here is the take on this vote by Clay Bailey of the Commercial Appeal.

During the pre-vote discussion, almost all of the aldermen invoked the names of Landers, Adam Underwood and Trent Fleming as the best of the interviews conducted with finalists last Wednesday.

After discussing the trio favored by the bulk of the board, Landers' name was presented as the first nominee. And, the five aldermen unanimously approved Landers, with only a small delay by Vice Mayor Forrest Owens before casting his vote.

The whole process moved smoothly just as if everything was choreographed before the meeting.

Of course we all know that would never happen."

THE SCHOOL BOARD ELECTION

The upcoming election pits two of the incumbent Board of Education members against newcomers. There is a third race in which no incumbent is running. You can get links to all the candidates' websites from  this post.

An understanding of some of the Board’s actions to date will, I hope, inform your voting decisions. Using JAM, the spreadsheet, and my own observations from the GMSD Facebook group, I will discuss three different issues: Start Times, Transparency, and Work Sessions. In Part 1 I will be discussing start times. Parts 2 and 3 will be posted at a later date. 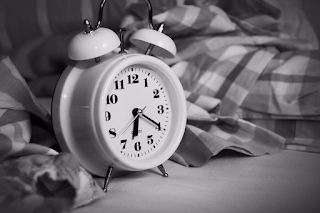 Because various candidates for the Board of Education are highlighting their own roles in getting the start times of the schools changed, it is useful to look at some history. It is clear from the evidence that the impetus for the start time changes was due to the persistent efforts of parents rather than the advocacy of any particular Board members.

From the beginning of the formation of GMSD, a large group of parents strongly advocated that the Houston High 7:00 am start time be changed. These parents argued, appropriately, in my view, that Houston High's start time should be brought in line with research showing that an adolescent’s school performance and health improve with later start times. For more information on that see the American Academy of Physician recommendations.

Now that we have our own school district, effecting this change should have been easy. But, that was not the case. As it turned out, we shared a bus system with the Collierville schools, and our contract called for penalties to be paid to Collierville if we changed start times. Also, in order to get the system started smoothly, it made sense to maintain the status quo the first year.

At a June 2, 2014 Board of Education meeting, a number of parents addressed the start time issue during the open mikes portion of the meeting. The minutes of that meeting are here. Because of this group's strong and well organized showing (the result of tireless effort), the board, in a unanimous vote, made an "executive decision to move to less than three bell times and age appropriate start times as soon as possible."

The interested parents took that to mean they probably would have to wait a year (2015) for healthier start times for their kids.
In the article Parents Unite for Later School Start Times Jennifer Pignolet interviews Laura Meanwell, and she describes the efforts and frustrations of the parents, and the effect the early start time has on her family.

Start time changes for 2015 were turned down by the Board on February 24, 2015. The vote was 3-2 against changing start times, with Mark Dely and Ken Hoover dissenting, and the meeting was described in Push to Change Germantown School Start Times Fails

In the following March 27 meeting, Mr. Hoover brought forth a plan for a "budget neutral" plan to move start times. However, in the middle of the discussion, some other Board members did not seem willing to discuss it.  Please see JAM for their account of it in their 3-27-2015 post, and also in the screen shot below. 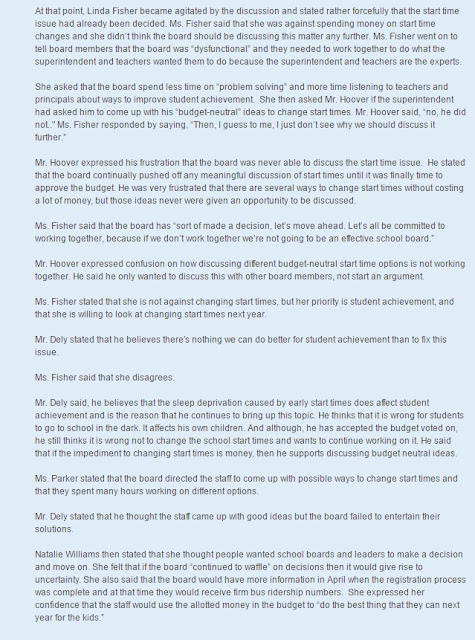 Start times were addressed again the June 3, 2015 work session. There are no minutes of work sessions, but thankfully JAM was there to report to us. Scroll down to the June 4, 2015 entry on this page. Superintendent Jason Manuel announced at this work session that he was excited to have found the $300,000 needed to change start times, and that it was his number one priority. But then he added the kicker-- the change would not begin until 2016. Two of the Board members, Mr. Dely and Mr. Hoover, expressed disappointment that the start time changes would not be implemented in 2015. All of the Board members, nonetheless, applauded Superintendent Manuel's efforts to make the change eventually.

Parents, however, were upset. Another year of 7:00am start times was very disappointing. One frustrated parent, Amy Eoff, addressed the Board at the open mikes at the 6-11-15 Board meeting.  The relevant Board minutes are here.   From those Board minutes:

Contrast the Board’s minutes with JAM’s account, which may be found by scrolling down to the 6-11-15 meeting on this page.

These clashing views on Ms. Eoff's presentation speak volumes about the manner in which the Board purports to keep us "informed." JAM is providing transparency. It also demonstrates why video recording the meetings is crucial to our learning what actually transpires at the Board’s meetings.
Over the ensuing months, there was a bit of pushback by some in the administration and others. Questions were raised about whether the $300,000 required for changing the start times could be better used for other purposes.  Also, it was feared that extracurricular activities would be affected by a later start time.  A few of the teachers did not like changing to later start times, because the earlier start times allowed them to schedule doctors' appointments in the afternoons.

Eventually, the administration called meetings of parents to hash out start time options. These options were put to an online vote by parents, and a consensus was reached.

Thanks to the parents' subsequent diligent efforts, in 2016 Houston High's start time was moved to 7:45, and the start times at other schools were also changed. I should further note that the Houston's new start time is far from ideal according to experts, and therefore many of the parents thought that a 7:45 start time should not even have been up for consideration.  But ultimately credit needs to be given to the parents who never gave up their advocacy for earlier start times, and to the administration for its role in providing the eventual opportunity for all stakeholders to come together. Finally, Germantown Announces New School Starting Times

My next post in the Back to School series will discuss transparency issues at the Board of Education.