Yes, another shoe has dropped. Jon Thompson so predicted. It seems that the City purchased policies that insured the lives of a host of individuals, including the City Administrator, Patrick Lawton, our former mayor, Sharon Goldsworthy and the current mayor, Mike Palazzolo. These policies were intended to remain in effect even after these officials left the City’s employ. The City has already spent $1.5 million on premiums, and will spend more in the future, despite the fact that almost all of the individuals currently covered are no longer employed by the City. In 2015, Rob Hale, the attorney retained by the City to assert a claim against the broker who sold it these policies stated, on the City’s behalf, that these policies made “little or no sense”, at least for the aldermen that are elected and not long term employees. Too bad our leaders did not realize this 13 years earlier when they purchased these policies.

The link to the new Commercial Appeal article is below. 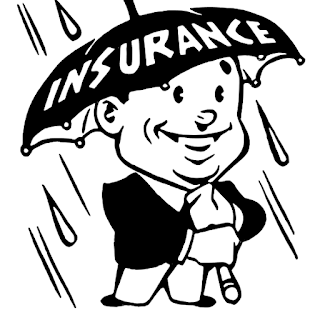 This revelation is hardly shocking. After all, as discussed in my two previous posts, this is the same city that could not detect, for a period of six years, $40,000 in over-paid car allowances, and that for 28 years has been considerably less than transparent in its approval of the City Administrator’s compensation.

Some points to ponder-

There now have been FOUR “givebacks” since citizens began questioning how officials have handled the City’s finances.—the $40,000 reimbursed by Lawton for the car allowance overpayment, and the cancellation by Palazzolo, Lawton and Goldsworthy of the policies that insured their lives.

It was only after the Commercial Appeal recently contacted her that Goldsworthy, just this past week, surrendered the policy that insured her life.

It was not until April 2015, after citizens began questioning Lawton’s compensation, that Palazzolo and Lawton cancelled the policies that ensured their lives.

Supposedly, $50,000 of the death benefits provided by each policy was to go to the city, but according to the Commercial Appeal article, only one individual designated that this be done. If the article is correct, not even Lawton, Goldsworthy or Palazzolo took the steps necessary to make sure, while their policies were still in effect, the City would in fact receive the $50,000 in death benefits.

Even today the City claims it cannot confirm the extent to which, if at all, it will receive portions of the death benefits under the policies that have not been cancelled.

Lawton told the CA reporter that he and Palozzolo looked “long and hard” at whether it made sense for their lives to continue to be insured under these policies. It is fair to ask why Lawton did not look “long as hard” at this before the City purchased these policies.

And, why did Lawton not make sure that the citizens themselves had an opportunity to look “long and hard” at the policies by placing them on an agenda before a meeting of the Board of Mayor and Alderman?

Furthermore, did Lawton think “long and hard” about the extraordinary dollar amount of the death benefits that would go to his estate?

I urge the readers to pay particular attention to the statement by  Carol Hinley stating that Palazollo and Lawton did not want this reported.

Here are some of the relevant documents.  Clicking on them will enlarge them.  I will probably be adding more over the next few days.

This one shows the policy of Germantown is to limit the amount of insurance for employees to $300,000. Patrick Lawton's death benefits were $500,000. 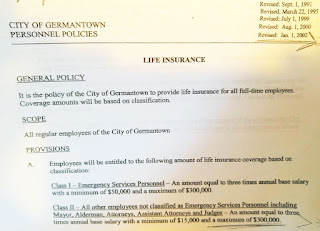 The investigation into the insurance matter followed this email by Rocky Janda.  He asked Lawton if Germantown did any business with Ed Barnett (the broker for these policies).  At the time, the City was in the midst of a very heated election. 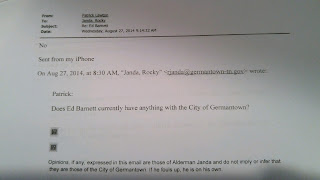 An affadavit signed by Pat McConnell gives details of the origin of the insurance polices. This affadavit was taken as a result of a threatened lawsuit by the City against Ed Barnett. The affadavit shows that Ed Barnett did not misprepresent the policies to the City.  It also states that the way it was approved was by asking each alderman individually. The City of Germantown did not pursue the lawsuit. You may have to zoom after you click on this to be able to easily read it. 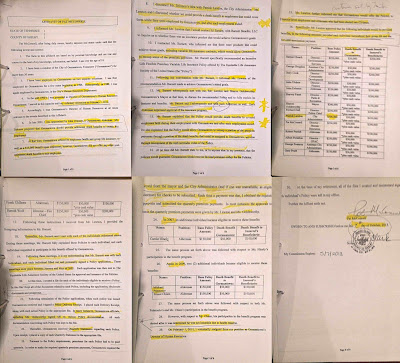 For those with smart phones, here are a list of the other blog posts:


Protecting Germantown Employees Comes at a High Cost for Taxpayers