A Little Background and Talking TRASH

The articles in the Commercial Appeal about Germantown politics have been fast and furious lately.  I want to compile these articles with links on this blog, so in order to catch up I may have several posts in a row. When I think I can add something to the discussion I will. You are free to disagree and say why on each page. I will not tolerate diversion, though.  A classic diversionary tactic is talking about the AAA bond rating our city has. I LOVE that Germantown has a triple A bond rating. However, a Triple A bond rating really has nothing to do with car allowances. If you want to talk about our Triple A bond rating, please do so on my July 10 post. What I am saying is keep to the topic on hand on each page. Thank you.

The first order of business is to chronologically look at the recent articles. The first story begins with a picture of our City Administrator, Patrick Lawton, picking up trash. 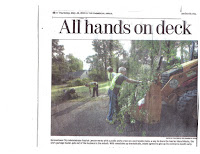 This was a nice feel good story about our employees temporarily pitching in after a sorry subcontractor for trash pickup was replaced by a new one.The administrative employees were helping out. At the time I smiled and thought what a great PR stunt! I meant that in a positive way. I didn't give it any more thought than that.

What followed was a letter to the Commercial Appeal from someone named Jon Thompson, absolutely blasting this action.

Letter to Editor from Jon Thompson (and the trash article) 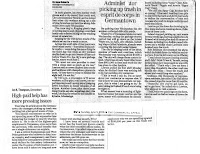 It turns out that Jon Thompson and someone I have never met named Sarah Freeman have been inundating the city with Open Records Requests:

Another article talks about the high costs of Open Record Requests for Germantown:

This is an interesting article about Jon Thompson.  It is worth a read if you have unlimited access to the digital version of the newspaper.

My Commentary:  I did not know what to think. What I thought was a brilliant PR stunt apparently incensed Jon Thompson. I had met him a couple of times decades ago, and knew him to have a fine reputation. He is not someone who would make lots of records requests without reason. I wanted to know why. He is using the state open records request law to get information. I decided I would start paying attention to the results of the quest to get records from the City of Germantown.

Another thought: Since I am a Germantown taxpayer and I am actually paying for these records requests, I might as well try to get them and post them online, so that all Germantown citizens can at least see their tax dollars at work. I am in the very beginning stages of trying to get hold of some of these, although I will certainly let the Commercial Appeal or other traditional media sources do the reporting.