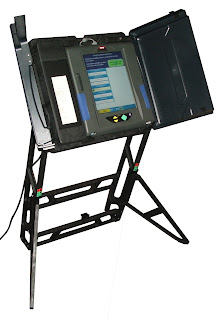 This Commercial Appeal article notes that Mr. Barzizza would like a shift in the balance of the BMA, and he is supporting challengers that would be more discerning than the current aldermen in their support for the city administration.

Barzizza states: "I want to see the numbers change and get a better balance than having a 4 to 1 vote on matters such as the city's budget and the Germantown Road Realignment Project," he wrote, saying that he supports the candidacies of both Dean Massey, who is challenging incumbent Dave Klevan, and David Nischwitz, who's challenging  incumbent Rocky Janda."

Although Germantown Road Realignment did not go forward, presumably because some other aldermen were ultimately convinced not to go against the clear will of their constituents, it was Mr. Barzizza alone that was vocally against the project from the get go. There was never any public vote by the aldermen, so the voters do not know exactly which aldermen ended up favoring the project, and which didn't. Obviously the City Administrator had private talks with the aldermen, and the result of those talks led to the project being dropped. This does not directly violate the Sunshine Law, but it certainly is not a transparent process.

The opponents had to go to extreme lengths to defeat the project, and started a website and a grass roots campaign that included a petition against realignment signed by over 1000 citizens. Without that effort, it surely would have passed, and we would be dealing with construction and the resulting loss of businesses now.

Rocky Janda has stated that he opposes using eminent domain for any project. Presumably, if eminent domain was not part of Germantown Road Realignment in the future, he would be more inclined to favor it.

During the Town Hall meeting on the issue, David Klevan made his disdain known for the opponents of the project as he called the petition against it a "blog" and noted that one comment on the petition page was from someone in Arizona. (The ChangeDotOrg petition site got many of the signers' locations wrong.) Mr. Klevan now calls the issue "dead", and used our water bill email addresses to inform us of this. See The IRONY of the Germantown Email Scandal

Please see my post on exactly why Germantown Road Realignment is not dead.

Mr. Barzizza also notes that he was the only one voting against the budget. The City Administrator's salary in the budget is higher than any other public official in the state, and he objected to that.

A contentious BMA meeting about the budget was covered
in this blog post.

Charter, Charter, What's in the Charter? And What is the City Administrator's Salary?

If we had all candidates at the Candidate Forum we would be able to point to that for their stands on issues such as realignment of Germantown Road.

We cannot do that because Leadership Germantown Alumni chose to go ahead with the Candidate Forum on the original date after they gave the challengers, Mr. Nischwitz and Mr. Massey only ten days notice of the event, and Mr. Nischwitz could not attend due to a previously planned out-of-town meeting. Yet the incumbents, all Leadership Germantown Alumni, had four weeks MORE notice of the event through their own newsletter.

The Leadership Germantown Candidate Forum is discussed in these posts: 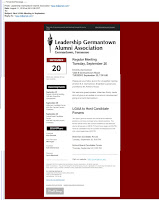 
What we do have is David Massey talking about Germantown Road Realignment at 7:08 in this Germantown Municipal Television interview.

None of the other candidates talked about Germantown Road Realignment in their interviews.

When asked about Realignment, Mr. Nischwitz responded by email to a voter:"I'm opposed to the realignment based on what I've seen designed and would not be interested in supporting. You're more than welcome to share my stance as being opposed to the alignment as designed and presented as of now. Of course, if the citizens saw a new design that they preferred/approved that would make sense I'd be sure to listen to them. As it stands now the citizens have spoken against it therefore I'd honor their position and represent them accordingly."

As noted above, Mr. Janda states that he is against using eminent domain, and both he and Mr. Klevan say that Germantown Road Realignment is "dead".  At best it is hibernating.

Although not mentioned in the Commericial Appeal, a more recent issue showed Mr. Barzizza to be at least partially at odds with the other aldermen. The public was given three days notice of a vote by the BMA on September 12 for a new school site at Winchester and Crestwyn.  After a pitch by the Mayor and City Administrator, a contract for the property was voted to be approved 5-0 by the aldermen.

After the vote, Mr. Barzizza, felt he was misled by the Mayor, because the Mayor had indicated that a property was not for sale, when in fact citizens later determined that it was. As a result of that, Mr. Barzizza addressed the School Board at their next meeting and urged them not to approve the contract without further investigation. A motion to table the issue passed at that School Board meeting.

More on the school site location issue is discussed in The Criteria for Selecting a School Site, and I provide links to all the candidates' Germantown Municipal Television interviews, with summaries on what they say about the proposed Winchester/Crestwyn school location in Aldermen Candidate Interviews and Positions on New School Location.

Links to Past Shining a Light on Germantown Posts