Donations Over The Top in Aldermen Races

The $$$ donations reported to the Shelby County Election Commission by alderman candidates are staggering, especially for a job that pays only $12,000 per year. These are the totals reported as of September 30:

Jon McCreery took the prize, with only a little less money than former Alderman Barzizza had when he ran for Mayor in 2018. The three candidates most flush with cash are all supported by Mayor Palazzolo, Alderman Forrest Owens, and Alderman Rocky Janda. Their signs are in front of the former Germantown News Building, now owned by ex-alderman and current SCEC Commissioner Frank Uhlhorn, and they are all using Watkins-Uiberall accounting firm, the long-time City auditor, for their filings. 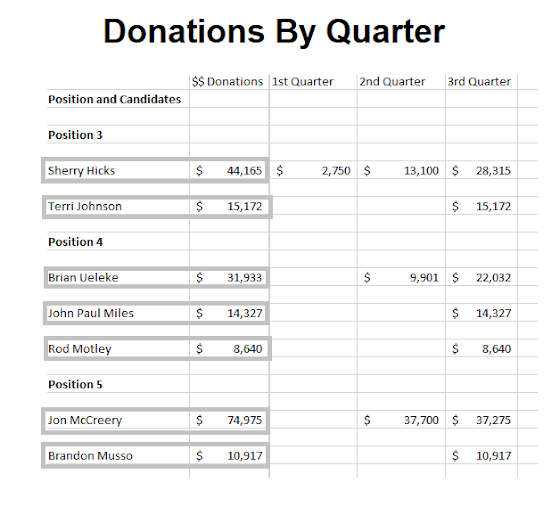 As you can see, in each position, the administration-supported candidates have considerably more than twice the donations of their challengers. Educated voters will keep that in mind when they see television ads or read slick mailers.

Where does all this money come from?

Although the SCEC has most of the filings on its website, for easy access I put them all in a folder. For convenience I combined reports when a candidates reported more than one quarter.

SCEC FILINGS
I wondered if Collierville candidates for Mayor needed this much cash, so I checked some SCEC filings for them. I found only two candidates with significant donations, one with $11,000, and another with $10,250.

As of this writing, some third quarter reports have not yet been updated on the SCEC website.