The bidding process for the proposed water tower is going full steam ahead without a proposed location. No vote has been taken by GMSD on a proposed land swap with the City.  I covered the August meeting of the Board of Education in Proposed Water Tower/Softball Field Land Swap Meets with Skepticism by GMSD Board. The City wanted land by Forest Hill Elementary in exchange for softball fields that GMSD desired by the high school. Daily Memphian reporter Abigail Warren did a much more thorough job of reporting in Germantown School Leaders Concerned with Land Swap Agreement. I suggest that you read her report now if you have not already done so, because it may not be available online in the future. It has been replaced by a much shorter version Germantown Board of Education Discusses Land Swap  Searches in the Daily Memphian website yield only the shorter version, and both versions seem to be missing in Google searches.

At the GMSD meeting, Mayor Palazzolo states that he is more than willing to work together on a joint meeting between GMSD and the Board of Aldermen. To date, no such meeting has occurred, and I have found nothing to indicate that one is scheduled. I have also found no indication that the City is considering an alternate location. Yet the City seems to be charging ahead with plans for a water tower, presumably on land it does not own.

Again, here is the full discussion at the executive session of the August GMSD meeting, with the YouTube link taking you to the beginning of the discussion about the water tower. See either my blog or the more detailed original article by Abigail Warren if you want details but do not want to spend time listening to the discussion. Among the many objections to the proposal was that the City forced GMSD to add hundreds of thousands of dollars worth of water pipes for a water tower during the construction of the school, and GMSD had not been repaid by the City.

As you can see, a BMA recommendation (?) is scheduled for a vote on November 11. 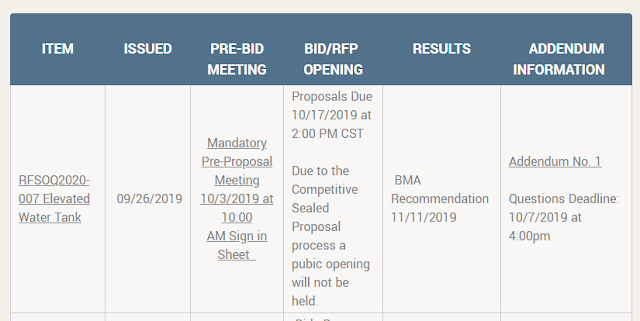 A citizen attended the "mandatory pre-proposal meeting" for potential water tower contractors held October 3, and he attempted to find out the various alternatives for the location.The City representative refused to answer his question. He recorded the meeting (audio), which I uploaded to YouTube.

I also learned through one question that the City does not have a software system for modeling, and uses the same "spot modeling" system it has used for forty years.