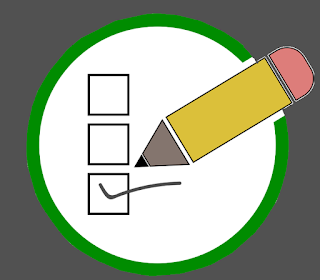 Abstract
An extended NextDoor poll on apartments has been ongoing. On my last report on August 12 (see Poll-Overwhelming Public Opinion Against New Apartments), a total of 502 people had voted on the poll. Now, a new statistical milestone has been reached, as now the respondents total 775. I will repeat most of the text of my previous post here, substituting the new numbers and calculating the new statistics with the help of an online statistical program. The results at the earlier cutoff had 71% of Germantown responders favoring no new apartments, 22% favoring keeping the about the same ratio of apartments that the City currently has, and 7% favoring a full build out. This update has the figures at 73% (no new apartments), 21%(a few more), and 6%(full buildout), respectively.

A recent NextDoor poll on apartment development was conducted of residents in Germantown neighborhoods. A total of 775 people answered the poll at the latest update, October 26. The results show that citizens, by a wide margin, do not favor adding new apartments to the City.

Here is the wording of the poll, and the percentage of the respondents choosing each of the options is noted in red.

Germantown staff reported at a work session July 21 that an aggressive build out of 2,141 apartment units over the next decade will not strain city services. Mayor Palazzolo expressed the view that the City has a shortage of new apartments. Detractors are skeptical, and do not want the proportion of apartment units to total residential units to go from the current 6.3% to the projected 16%. Germantown residents-- Please respond to this poll.

A few more apartment units are okay, but keep the same 6-7 percentage as now.
21% want the ratio of apartments to total residential units to remain the same

It must be noted that the respondents were encouraged by the pollsters to use write-in votes in the comment section for answers.other than the ones above if desired. There was one write-in vote.

After the apartment moratorium was announced in December 2017, the public rebelled against the approval of the Viridian and Watermark apartment developments. Several spontaneous apartment polls popped up simultaneously on Next Door. There was nothing systematic about this, and the polls were all worded differently. In the end, one poll was presented to the BMA, because none of its neighborhoods included Collierville or Memphis, as others had. The results of that poll and one other one, that happened to be clearly worded, were also posted in my blog post of January 2 (2018). In those polls, 94-95% of citizens were against new apartments.

The Methodology and  Discussion

NextDoor is a good place for polling because -

1) everyone has verified addresses, and can only vote once,
2) the poll is by secret ballot, and
3) the proportion of households who belong to NextDoor in most Germantown neighborhoods is greater than 50%, although fewer than that check it regularly. A reasonable assumption can be made that the NextDoor users are representative of the City as a whole.

The NextDoor results only give rounded percentage numbers in each category, and the total number of people voting in each of the three polls. The raw numbers in the answers are not given. Mathematical estimates had to be used to compute the final polling in each of the three polls when the NextDoor poll percentages did not exactly total 100% due to rounding by NextDoor. This did not affect the final tally of percentages.

The polling began in all three areas on Thursday, August 8, and the results were compiled on Saturday, October 26, although the polls remain open. The poll wording was formed prior to the public notice of the nature of the resolution being voted on by the BMA on August 12. There were 775 total responses received.

This poll wording took care to remind (or inform) people that an in-house study found that there would be no significant impacts on services or infrastructure with a build out of 2,141 apartments. Unlike the polls taken in January of 2018, a time span of one decade was used for the choices, because that was the time frame used for the in-house study.

The statement "Mayor Palazzolo expressed the view that the City has a shortage of new apartments." received some push back from the Mayor, who stated that this was inaccurate.

At his request, a clarification was added in the comments of the three polls, to explain the context of the statement, which is found in a July 26 article in the Memphis Business Journal:

According to the article,

We’ve got to introduce living choices in our commercial areas … [and] have more of a balance of housing stock and housing choice,” Palazzolo said.

The city has a “gap in housing for millennials,” he said, with a lack of residences in walkable areas as well as a lack of new condos and apartments.

Here was the exchange between the Mayor and Marlene, one of the three pollsters: 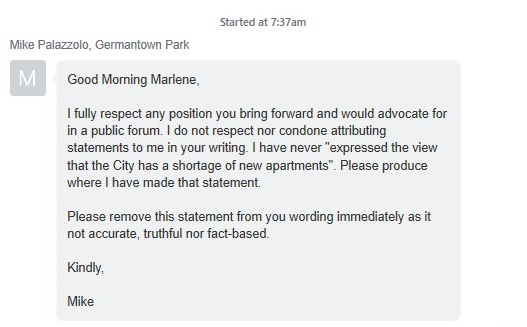 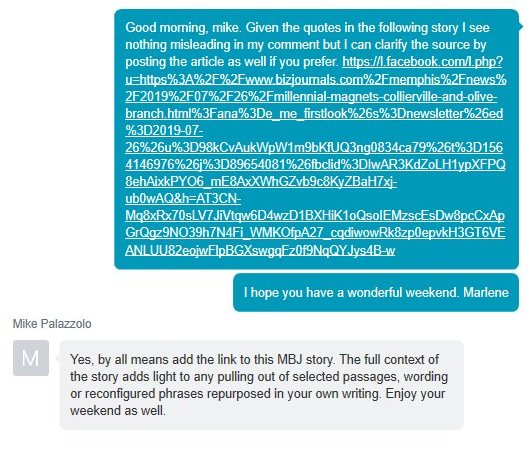 Note: The correct link to the MBJ article was used in all three polls.

The polls were all open to comments but relatively few people took the opportunity to comment, at least in comparison to the number of people who voted the poll. After the clarification of Mayor Palazzolo's statement, no one stated that the added information changed their viewpoint or their answer. In one poll the above exchange was posted, and a few mentioned that they did not understand his objection.

No one stated that they were in favor of apartments in mixed-use developments but against apartments that were stand-alone.  On another platform, Facebook, one person asked how they should vote if they liked the apartments over the businesses in Thornwood, but not the apartment building at Thornwood, even though it is part of the mixed-use development. I answered that a reasonable way to vote would be to keep the same percentage if that is the way she felt, because if those are the only kinds of apartments approved, the ratio of apartments to total residences would likely stay the same. A few people in one poll mentioned that the demand must not be large for apartments in Germantown because our complexes are not filled. Some in the other two polls spoke about the need for senior housing and wished that the poll had taken that into account.The only other reference to the poll itself was the person (previously mentioned in the abstract above) that thought it unfair that more options were not given. As a result, the "other" option was immediately added, with answers (ratios) to be written into the comments. Only one person took advantage of that option.

In this updated poll with new numbers, no new comments were added to the three polls that were remarkable.

Here are the screenshots of the new results of three polls, taken on Saturday, October 26, and the calculations used to compile them. Roughly, the dividing line between north and south was Poplar, and between east and west was Germantown Road, with a few exceptions. As you can see, the results were virtually the same in each neighborhood, with between 69% and 73% favoring no new apartments. 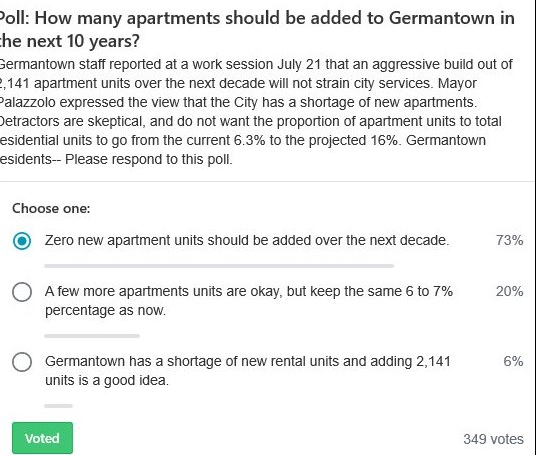 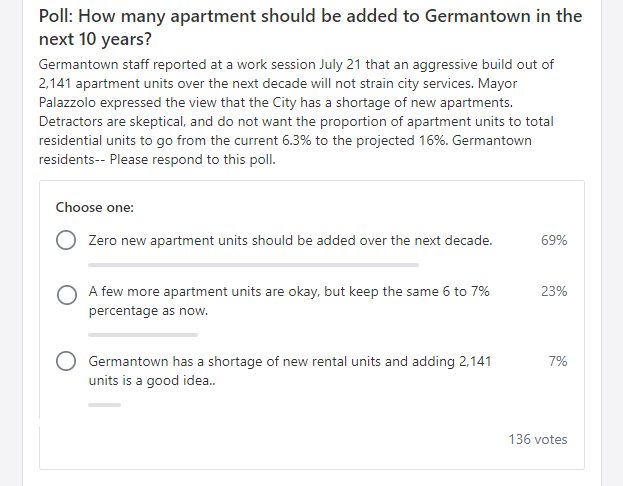 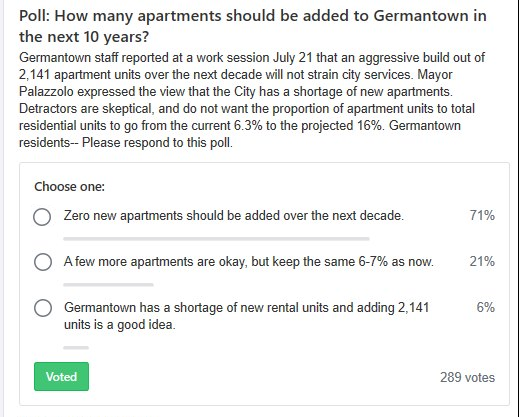 *The numbers below may be off by one or two votes in each category due to the deficiencies in NextDoor reporting of polls. This will not affect the Final Tally. 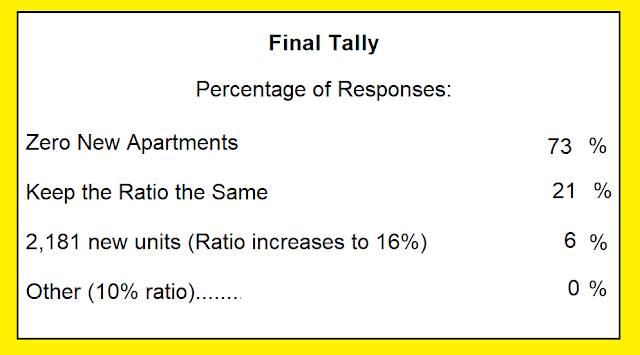 Because the response level was high (500+), using an online calculator, it was determined that the poll is statistically sound, given the assumption that NextDoor participants are representative of the City as a whole. There is a total of 94% (73% + 21%) of respondents who want the number of apartments to either stay the same, or only increase in proportion to the increase in the number of single family homes, over the next ten years. Statistically there is a plus or minus 4% margin of error with a 95% level of confidence for this poll. Translated, statistically that means there is a 95% probability that the true number of people in Germantown who want either zero new apartments or to keep roughly the same ratio of apartment units is between 90% and 98%. Because the number of respondents is greater than the last update, the confidence interval has narrowed.

The lack of exact numbers of votes from NextDoor was difficult to work with, but the overall conclusion cannot be denied.


Aldermen are voted on by the public, and represent the City of Germantown. Planning Commission members are appointed by the Mayor, who is also an elected official. The residents of Germantown pay the salaries of the City staff and elected officials. New zoning ordinances should be written that pay heed to the wishes of the tax-paying public at large, when the results are clear. The tax-paying public either overwhelmingly wishes no new apartment units (73%) or just a few more (21%). There was no favoritism expressed in comments for mixed-use apartments over stand-alone apartments.
Posted by Polly at 3:27 PM