Park Commission Voting on Severe Restrictions in Park Use With No Official Notice; Poll Favors Adult Courts by 10 to 1 margin 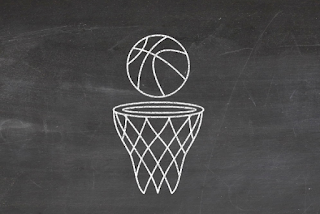 It is the last minute notice that bugs me the most. You just DO NOT spring major park use changes like this on the public without a full public discussion. Our parks belong to the citizens, and are there for the use of the citizens. We pay for them, and we use them. The parks are a major part of our lives. PLEASE CONSULT WITH THE CITIZENS before making major changes. Alderman Scott Sanders found out about these proposals yesterday evening, and has been posting all over Facebook warning people that various restrictions are scheduled to be voted on this afternoon: Here is his Facebook post: 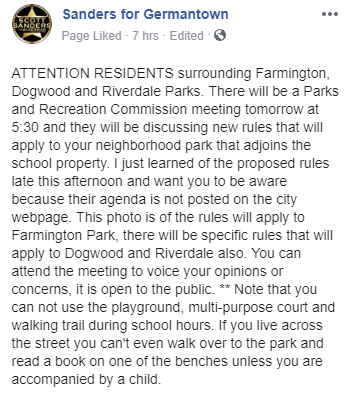 PLEASE NOTE in the above:

Before going any further, for those following his suggestion to attend the meeting, fair warning--the parking in the area is horrendous. One time I was going to attend a meeting, and I turned around and went back home after finding no place to park at 5:15. So either get dropped off (preferable), go very early and take your book or tablet to entertain yourself while you wait, carpool and be prepared to walk quite a distance, etc.

I presume the new rule changes will go to the BMA in the form of a proposed ordinance after the Park Commission holds this vote, but I do not know that for sure.

Park usage of the basketball court has been discussed before, and because of an outcry by the citizenry, a compromise was (supposedly) reached, that the new multi-purpose court at Farmington would be adjustable, so that adults could play on the regulation sized hoops. It was Scott Sanders who originally brought the changes to Farmington Park to our attention in this March 9, 2019 blog post.

When these changes involved removing ten foot goals from the court, a public poll taken on the Germantown Bulletin Board Facebook group (Dear Admininstrators of GBB Facebook group: I have written permission from the author of this post to republish the poll results. I reprinted the totals at the side for readability):

Furthermore, the Park Commission received feedback from citizens indicating that the Farmington neighbors desired that a full-sized basketball court for adults should be available. An open records request would be able to confirm that. Supposedly a compromise was reached whereby the goals would be adjustable from eight feet to ten feet.

But..........there are other changes proposed. Here are the proposed rules for Farmington Park: 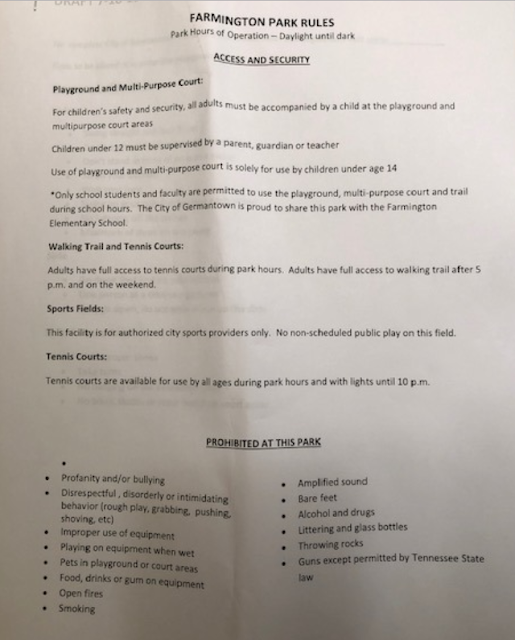 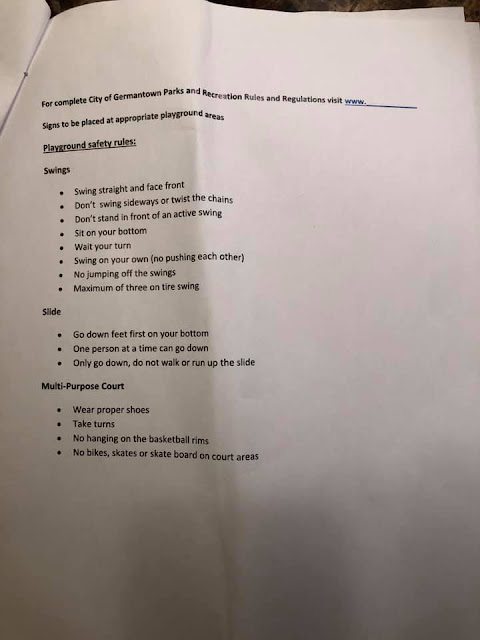 When the Farmington basketball court was discussed in the past, the issue of "outsiders" playing on the courts was brought up. Apparently some neighbors complained of speeding/language/trash. However, most blamed all of this on Germantown citizens rather than outsiders. I personally would love to see speed bumps by Farmington Park to prevent speeding in the area. Are the proposed rules a way to ban "outsiders" without expressly doing so? I would argue that this is the case, and that we are not truly living up to our claim of embracing a "culture of kindness" if we enact these rules.

But the rules extend far beyond that. A family can't even play H-O-R-S-E together under these restrictive proposed new rules. And check out the new walking trail restrictions, etc.

The Parks and Recreation phone number and email is listed at the bottom of this City of Germantown page: