The tree lovers in our community need to know that major changes may be coming to our tree ordinances. The likely outcome could eventually mean many fewer trees in our city.

This coming Tuesday, election night, the Planning Commission meets to vote on the following proposal:

The entire measure is here:

Currently, the city requires developers to mitigate tree loss by planting new trees in other parts of the property, or in parks in the city. The proposed change will allow a developer to pay a fee to the City for the trees that the developer removes, rather than forcing the developer to replace trees. The proposed fee is capped at $200,000 per development. There is a need for a change in the ordinance, as it isn't always convenient for the developer to replace the trees on the property, and the City feels it does not always need new trees in parks. The proposed ordinance states that this new tree fund will be used to either buy trees when needed, or for tree maintenance. As I will explain, this language is not specific enough to ensure that our tree cover will remain the same. In fact, by giving the city administration wide latitude over the way the funds are spent, the city could lose a good deal of its tree cover. Below is the language of the proposed addition to our code (in red). The original code is black. Although this is for commercial developments, the same changes (in red) apply to residential developments: 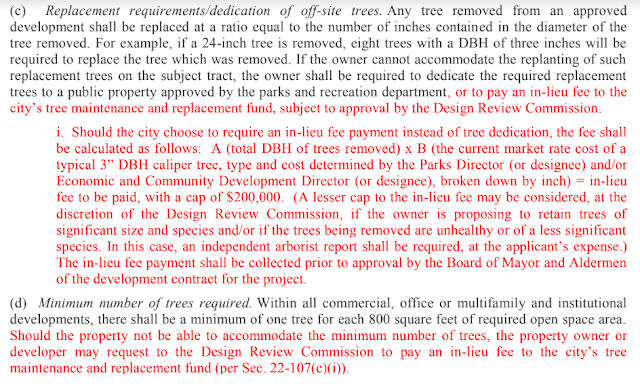 The Tree Fund Should Actually "Mitigate" the Loss of Trees-- 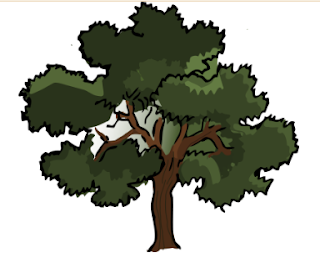 There is no mention of how the "tree maintenance and replacement fund" is to be administered, other than the vague language in the ordinance. Will the city administration have the  discretion to determine the specific expenditures from the fund? It appears so. It may be a good idea to have a tree mitigation fund, but I would like to see a citizen board have oversight of the expenditures, and I don't see anything in this ordinance change that calls for that.  Specific guidelines concerning a tree mitigation fund should be written into our ordinances. An example is Portland's ordinance on a tree mitigation fund, which provides the detail that our proposed ordinance lacks. The city needs something similar to Portland's ordinance to ensure that we do not lose our tree cover. Notice that "maintenance" of trees is not included in the allowable expenditures from the fund. It is crucial to specify that the City's fund be administered separately from the general operating funds, or general park funding, and Portland's ordinance does exactly that: 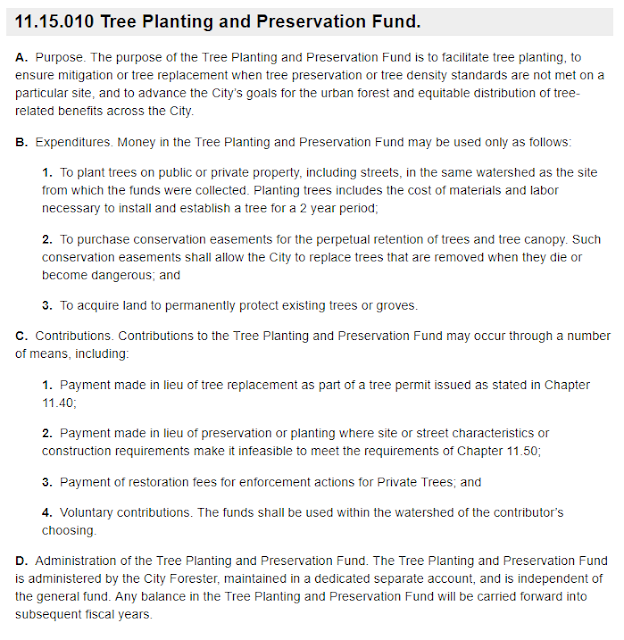 As I explained, the fund for trees should not be merely a funding source for the City to pay for regular maintenance of existing trees, but should truly mitigate the loss of trees due to development, as the mitigation fund does in Portland. At its heart, this is a transparency issue. If this ordinance is adopted as written, it would mean a steady erosion in the number of trees in our community. Is that what we want?

In the City's proposed ordinance, the Design Review Commission has the authority to approve the use of the City tree fund rather than the replacement of the trees for a project, but the ordinance does not give that commission or any other commission any oversight role in approving the specific mitigation fee that is calculated. The ordinance calls for the City (either the Parks Director or the Director of Economic Development) to determine the mitigation fee for the developers by using a the formula written into the ordinance. There appears to be no citizen oversight of the fees that are charged, through specific Planning Commission, BMA or other approval.  The fees are due before the development comes before the commissions.  We need more checks and balances.

Without citizen oversight over both the fees charged and the expenditures from the fund, the tree mitigation fund could morph into a City slush fund.

A Fixed Dollar Cap Makes no Sense, and Favors the Largest Developments over Smaller Ones

The City looked at other cities with tree ordinances, and may have cherry picked some of their provisions. A few of the cities do have mitigation funds (Oxford, Chattanooga, Charlotte, and Portland), but the City has provided us with no information about the "caps" for mitigation amounts in those cities. Apparently the City came up with the proposed $200,000 cap by looking at the cap the City has for public art. There really wasn't any other justification for the cap that I could see. I would want to know more. Why is it necessary? Which of the cities that they studied had such caps, and how much?  Which specific projects in the future will likely have this cap reached? How much would projects owe if we had no cap? We need the answers to these questions.

Charlotte has a cap, which can be found here. In Charlotte,  the mitigation rate is a a per acre amount based on the tax valuation of the property. If the tax base of a development is above the average per acre tax base for the city, the cap comes into play. Due to this "cap", developments on relatively expensive land do not pay higher mitigation amounts per acre than developments on average priced land. Thus the cap is based on the number of acres rather than a flat dollar amount. This makes sense. Why should a seventy five acre development have the same cap as a five acre development? Isn't that just punishing the smaller developer in favor of the larger one? If there needs to be a cap, it should be on a sliding scale, and determined by a per acre amount, not a flat dollar amount.

It is particularly infuriating that the largest developers will be able to gut a plot of land of all of its trees, and then pay a capped amount that is a fixed dollar amount rather than a per acre amount. And, again, there is no oversight on how the funds will be used. How can this possibly be justified?

Change in the Future?

A possible future change to the ordinance is also mentioned:

This language needs to be clarified. It does appear the city wants to change the current 1:1 ratio of tree replacement to something less stringent. I am not getting much help on interpretation of this possible *future* suggestion by looking at the Collierville ordinance, which the above quote cites as an example. The Collierville ordinance states that the BMA and Planning Commission set the tree replacement ratio for each development:

The proposed change to the cell tower location ordinances is found here:

Approval of the Amendments to Wireless Transmission Facility (sec. 23-86) Ordinances

The ordinance is responsive to this state legislation-

This 2018 state law takes precedence over local attempts to regulate cell tower placement. I have not studied these measures in detail.  Please let me know if any of you can explain these pieces of legislation to me.

There are likely two sides to the issue, but I personally come down strongly against the park proposal that will come before the Planning Commission Tuesday. Here it is:

Here is the important snippit: 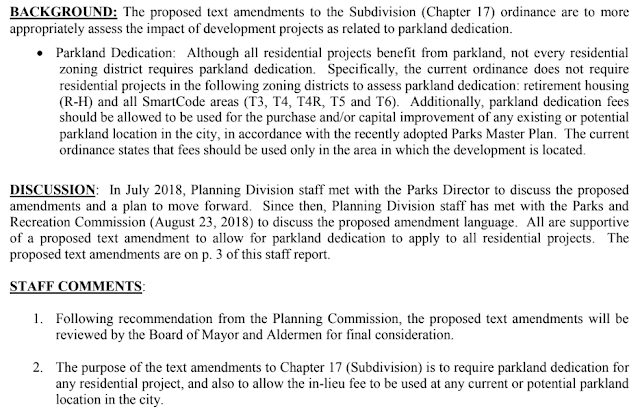 It does make sense for the city to be able to charge all residential projects for parkland designation. One strength of our city is in its outstanding system of neighborhood parks. Unfortunately, under this proposed change, the parkland designation funds from developers can be spent anywhere in the city! Why would we want to abandon our tradition of neighborhood parks and have developments be charged a fee for parks that are not built in the same neighborhood?

The City wants to do this to help pay for its $72 million dollar Parks proposal, the majority of which I believe is a boondoggle, unnecessary, irrelevant for the average citizen, and likely a financial overhang for the City for years into the future. The City took feedback from citizens interested in the parks about a year ago, and here are some of the results: 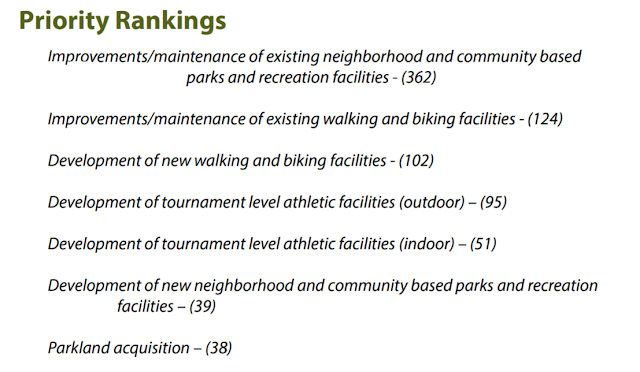 The parts of the Parks proposal that I object to have little to do with community wellness. One example is the over twelve million dollars proposed for a sports complex in the Forest Hill Heights area. There is no demonstrated need for such a project, and no cost/benefit analysis has been done. The City is simply moving serviceable soccer fields from the Poplar Pike area to Forest Hill Heights, and installing artificial turf tournament level playing fields. This will harm citizens by the necessity of charging higher usage fees for these fields, and the project will likely bring in far fewer dollars to the city coffers than the city spends on upkeep. There are also costly changes to the Poplar Pike parks that do not benefit the average citizen. Let's keep our emphasis on neighborhood parks. That is what the citizens desire. All other proposals that are sold to the citizens on the basis of an income stream should be subject to an unbiased cost/benefit analysis.

I have noticed that the City likes to propose major ordinance changes around election time, and this year is obviously no exception.