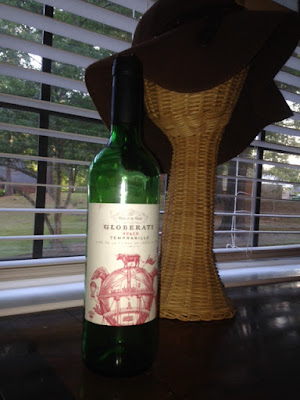 Before I begin talking about the City's November 28, 2016 change to its alcoholic-beverage code sections, I want to share a wine recommendation with my readers.

I am happy that over one year ago our city voted to allow wine sales in grocery stores. I always thought that the prohibition of grocery store wine sales was intended to ensure that the public paid higher prices than we would have if we had had a more competitive market. Now we are all able to enjoy wine with our meals more affordably. The low-priced Spanish wine, "Globerati", available at Whole Foods, is wonderful. If you enjoy wine, try it. I feel particularly unselfish sharing this recommendation with you, because Whole Foods often runs out of this brand. Yes, it is a bit more pricey than Trader Joe's two buck chuck, but who really knows when and if that chain is actually coming to Germantown?

If you are interested only in my wine recommendation, you may stop here. The balance of this post goes into the alcohol ordinance changes that were passed without proper public notice.

This is a series of five posts on the same subject - the process through which the City, without adequate notice, permitted restaurants in T4 areas to sell alcoholic beverages. In actuality, this permission for restaurants to sell alcoholic beverages was expanded to other areas as well; however, for the sake of simplicity, I will simply refer to "T4" to include all these areas.


At the time we voted for wine in grocery stores, we did not realize that the City would use our vote as a pretext for broadly expanding the alcohol code sections, and that, in this process, the City would inaccurately claim that it was simply getting the City code sections in line with the language of state statutes. State law specifically defines "Retailer" and various other terms pertaining to the sale of alcohol. We were led to believe that the City was acting only to make its alcohol code sections consistent with the state definitions. In truth, the City, by expanding the areas in which alcoholic beverages could be sold, did much more than simply conform our code sections to state law.

The process through which the City implemented this expansion was, to put it mildly, opaque. The City shrewdly ensured we would not discover the changes until after they went into effect.

This saga has been exceptionally confusing, mainly due to the City's puzzling actions and statements throughout the whole process, and the lack of transparency that hampered citizens' probing inquiries. I have previously written several past posts on this matter, including Bars and Liquor Stores?-in "Transition" T4 Zoning, Zoning Changes Tabled-To be Discussed at Retreat and Public Meeting on Alcohol Changes Set for April 24. When writing these posts, I lacked complete information, and they illustrate just how confusing the City's actions have been. Sarah Wilkerson-Freeman made and sent numerous calls and emails to the City administration seeking clarification, and her requests were either not answered at all, deflected, or not answered in a timely way.

Please understand that I take no position on where alcoholic beverages should be sold.  I focus here solely on the non-transparent process through which the City is changing our code.

Rather than write one super-long post, I have decided to write a series of posts on this entire saga.

Cheers! Part I, The Ordinance Nobody Knew About

Cheers! Part IV, Between the Second and Third Reading of Ordinance 2016-10, the City Eliminates Distance Protections.


For this particular post, I prepared a "Cliff Notes" version. 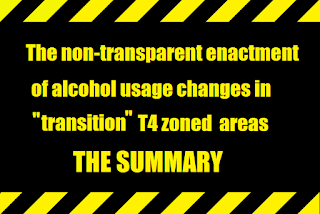 By way of background, areas designated "T4" are transitional areas between residential and commercial development. Although the changes discussed in this post also affect other areas, I will, for the sake of simplicity, use the term "T4 area" to include them all.

It is the residents of the neighborhood abutting one particular T4 area, the Neshoba-Cordova-Germantown Road triangle, who are most loudly protesting the T4 changes. The map below shows this triangle area, along with another T4 area east of Thornwood. 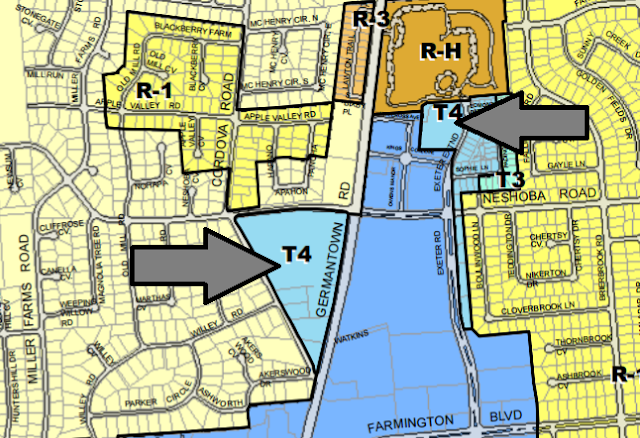 The changes to T4 were implemented on November 28, 2016, when, on its third and final reading, Ordinance 2016-10 was enacted by the BMA. The first and second readings had previously taken place on October 10 and November 14.

Ordinance 2016-10 (link is to the current City url), among other things, amended an already existing code section, 3-116, which specifies where establishments (both wholesale and retail) are permitted to sell alcoholic beverages. The effect of Ordinance 2016-10 was to permit, for the first time, retail establishments, including both liquor stores and restaurants, to sell alcoholic beverages in T4. The City disputes this in part, arguing that section 3-116 never prohibited restaurants in T4 from selling alcoholic beverages. The City is wrong, but I will wait until my next post to explain why the City's position is legally incorrect. For now, I just want to focus on the process.

The November 28 enactment of Ordinance 2016-10, was implemented in a completely non-transparent manner. I say this for three reasons. First, the publicly noticed agenda items were mislabeled, and thus misleading. Second, the City's explanations of its intended actions during the BMA meetings omitted material details. Finally, the citizens had no access to then-proposed Ordinance 2016-10 on the City website. Although we could have seen the changes that were made had we specifically requested them from the City, we had no reason to do so, because the public notices did not tell us that the City intended to amend section 3-116.

The agenda items noticed to the public stated that changes were being made to the Beer ordinances. Beer use and sales are treated in a completely different set of code sections from those dealing with other alcoholic beverages. Although there were a few comments about changing alcohol code sections during the October-November 2016 BMA meetings, these were brief matter-of-fact remarks that the changes were needed only to conform the alcohol code sections to state law. The import of these remarks was that no significant changes were being made with regard to the sale of alcoholic beverages. This was incorrect. Significant changes were indeed being made. And, there has never been, either before, during, or after the October-November meetings, a public announcement that the sale of alcoholic beverages was being expanded into T4 areas.

Contrary to the City's public notices, the T4 change has NOTHING to do with amendments to Beer Ordinances. The fact that the City captioned the ordinance, “Amend Chapter 3 Alcohol Ordinances”, is proof positive that the City knew, when it posted the agendas, it was not simply making changes to the beer ordinances.

During the third reading, which took place at the November 28 BMA meeting, the City made another change to proposed 2016-10. This change, which had not yet been brought forward at the time of the second reading, amended code section 3-114 to eliminate the BMA's discretion to mandate a distance of 200 feet between homes and establishments that sell alcoholic beverages. This change was not even "red-lined" for the aldermen in their packets ("red-lining" denotes this change) - something always done for code section changes. And no reference to this additional change was made during the meeting itself.


How A Private Citizen Discovered the T4 Changes

Proposed Ordinance 2016-11, among other things, sought to change various requirements for buildings, setbacks, garage lighting, etc. The publicly noticed agendas stated that proposed Ordinance 2016-11 dealt with "General Amendments of Zoning Code". Ms. Wilkerson-Freeman observed within these general zoning amendments a red-lined version of a proposed amendment to code section 23-763, part of Article VII, the Smart Growth Plan. More specifically, she observed a table that revealed a change in the permissible retail uses specified by the Code of Ordinances for T4. Having previously seen no references whatsoever to T4, Ms. Wilkerson-Freeman was naturally curious. Acting upon her curiosity, she made inquiries, but she was rebuffed.  Here I link a sample of emails that illustrate the difficulty Ms. Wilkerson-Freeman encountered.  Her March 23 email to the BMA (the third in the series) details the City's failure to respond to her questions.

Throughout her numerous efforts to obtain answers to her questions, Ms. Wilkerson-Freeman was never told that the BMA had previously expanded the sale of alcoholic beverages into T4 areas. She did not learn this until March. And, again, she made this discovery with little or no help from the City - quite an accomplishment, given the mislabeled public notices and other obstacles she encountered.

The City later tabled 2016-11. It remains to be seen whether Proposed Ordinance 2016-11 is brought up again sometime in the future.

Following the BMA retreat in February, the City proposed a new ordinance, 2017-6. The City is proposing this new ordinance as part of its effort to correct the action it had taken when it enacted Ordinance 2016-10. Specifically, the City wants to retract the permission it granted to put liquor stores in T4 (the City says, and I am sure this is true, that it never intended to permit liquor stores in T4), while at the same time continuing to allow restaurants to sell alcohol beverages in T4. The City seeks to achieve this objective by doing two things: (1) through the enactment of 2017-6, re-working the language of Ordinance 2016-10 and (2) arguing, for the first time that restaurants located in T4 were already allowed, prior to November 28, 2016, to sell alcoholic beverages. The City's argument is legally untenable, as I explain in my next post.

No citizens spoke in favor of proposed Ordinance 2017-6 at the April 24 BMA meeting. Several citizens did, however, speak against it, all demanding a repeal of Ordinance 2016-10. Some objected to the non-transparent way the process has been handled. Other citizens, undoubtedly thoroughly confused by this entire process, were concerned that the City had taken action to permit restaurants to sell alcoholic beverages in T4. It cannot be overemphasized that these citizens, because they had not been given adequate notice, had only recently found out about an action that the City had taken back on November 28.

At this same April 24 BMA meeting, the City refused to acknowledge that, on November 28, it had granted new permission to restaurants in T4 to sell alcoholic beverages. As I have noted, the City instead, announce to the citizens that restaurants were already permitted, prior to November 28, to sell alcoholic beverages. This is incorrect, and, again, I explain why in Cheers! Part II, The City Muddies the Waters with Last Ditch Legal Argument.