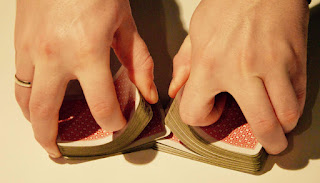 The deck that was stacked by the administration for the appointments of liaisons to the city commissions was shuffled in the special called meeting on Monday night.

Please see my original post on this subject here:

Deck is Stacked with Board Liaison Appointments

I struggled with how to report on this, but I decided to begin with the video, and end with some of my commentary, even though my commentary repeats some of Sarah Freeman's observations on the timeline.  Ms. Freeman attended the meeting, recorded it, edited the video, and referenced times in the video where various things were discussed. She also provided some commentary. I merely uploaded it and viewed it a few times. She wisely edited out discussions concerning the citizens who would serve on the commissions. According to her, one can get an audio version of the full meeting from the city. Regular BMA meetings are videoed, but this meeting was held in a conference room and official video is not available. For this reason we owe Ms. Freeman a debt of gratitude for the time and effort it took to provide the public with transparency.

Here is the video timeline provided by her to us, as well as some commentary by her:

This video was trimmed from one-hour in length to approximately one-half that time. The entire audio of the meeting may be obtained through a TN Open Records request submitted to the City Clerk, Michele Betty. This video was shot and the transcriptions created by Sarah Wilkerson Freeman.

As Alderman Owens remarked, “By nature of this discussion here today it kind of evened-out a little better than it was originally slated to be.” Indeed. But the pre-meeting “slate” system created an unfortunate dynamic in which two aldermen pre-emptively held significant power over future developments and financial sectors of city government. This placed the onus on the aldermen who had been granted no such power to confront their colleagues and try to wrestle even some positions away. That is not exactly a democratic process, it certainly isn’t fair nor wise. Likewise, it was discovered that the Ordinance had neither been read nor followed in previous years by the Administration.
But the light has been shown on how our city government works when the voices and concerns of the people are represented and the camera is rolling. That is a victory.


As Mayor Palazzolo stated, “And now the work begins.”

It is interesting that four out of the five aldermen seemed to have issues with the "slate" that Patrick Lawton had submitted. Only Rocky Janda seemed comfortable with his assignments, as he cited the advantages of "vertical integration" in budgeting and finance matters.

Besides the obvious issues of concentration of power in the "slate", the administration itself had two immediate changes:  1. Mary Anne Gibson had been assigned to be liaison to the Library Commission. There is no liaison to the Library Commission.  2. Mary Anne Gibson had lost her position on the Board of Zoning Appeals on the slate, and it had been given to Forrest Owens. This is despite this (from the Commercial Appeal article):

"It's not perfect, but it's recommendations based on experience and boards members have served on in the past," City Administrator Patrick Lawton said of the process earlier in the day."

(Note: If serving as a  liaison to a particular commission in the past was a criteria, why was this position moved on the slate from Mary Anne Gibson to Forrest Owens?)

That was the least of the problems, it turned out. Not only did Mary Anne Gibson want to remain the liaison to the Board of Zoning Appeals, it also was against the charter to change the liaison to this particular commission in the middle of the term, without her consent!  Patrick Lawton claimed he only discovered this the day before when looking over the charter. From what was said in the meeting, it is quite possible that Mary Ann Gibson called this to his attention.

Then it gets even more embarrassing for the administration. John Barzizza noted that he had specifically been asked to give up this (or another) position the prior year by Patrick Lawton, and now he finds out that this went against the charter. He registered a protest.  Mary Anne Gibson says she had not originally even expressed an interest in the BZA position, and correctly distanced herself from the decision to take the position away from Mr. Barzizza. Now that she has served on it, she wants to stake her claim.  All this discussion takes place in the beginning of the video, as noted above by Sarah Freeman.  I found this quite fascinating. There are more details that can be accessed by viewing the video.

Because of the publicity of the issue raised by Sarah Freeman reported in this blog, the questions by the Commercial Appeal writer in response to the issues raised in the blog, and finally the admission that there were two large errors on the "slate", the slate was now being characterized as a starting point, and that some "horse trading" was fine.

If you look at my previous post, you will see that the "slate" was not originally characterized as being a "starting point", but more of a done deal, from the office of Patrick Lawton:

If he had originally hoped for discussion, perhaps it would have been more prudent to note this as a starting point for discussion, or at least put "proposed" in the subject.

Fortunately the administration does seem to respond to public scrutiny at times, so we should be thankful that the community has some watchdogs like Sarah Freeman to help provide that scrutiny. Without her efforts the charter provision on the BZA liaison could very well have remained undiscovered, and the subsequent "horsetrading" would not have occurred.

The rest of the meeting had to do with the horsetrading. You can check the timeline above for more information on that, or view the video.

As it turns out, Forrest Owens expressed discomfort with being a liaison to all three quasi judicial commissions, and after he gave up BZA back to Mary Anne Gibson, he also traded away being Design and Review board liaison to John Barzizza (Rocky Janda said "no" to Mr. Barzizza's request to trade Finance). Dean Massey thought it would be logical for him to take over as the liaison to Personnel, because he had experience in this area and it had been held by his predecessor (Mr. Klevan) in the past. The shift in this position from Mr. Klevan's alderman position to Rocky Janda was another example in which the experience of the board members and what aldermen had served on in the past did not seem to have been considered by the "slate." Rocky Janda agreed to trade the Personnel liaison position, although he then noted the value of vertical integration. The Personnel Commission is particularly important in light of issues raised in Commercial Appeal articles last summer, and noted in these past blog posts:

Charter, Charter, What's in the Charter? And What is the City Administrator's Salary?

Thank you Jane Roberts-Vacation Buybacks and Other Perks

Shining a Light on Germantown wishes the very best to all our aldermen in their positions of responsibility.  As I reflect on the last year, I feel a lot of gratitude for the citizens who care enough to be informed about governance issues, and who read this blog.

However, I am particulary grateful for the citizens who serve our community in official capacities. We all need to remember that governance often involves conflict, and that the citizens can be better informed when decisions are hashed out in public, even if that conflict can look "undignified" on the surface.

The complete list of the aldermen liaison positions is read by Mayor Palazzolo at the end of the video, and the newly shuffled slate is passed unanimously.