Major Proposed Zoning Changes, a "Public Hearing" and Nobody Came 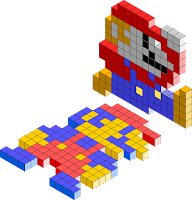 Without any fanfare, Germantown's "Smart Growth" zoning appears to be in retreat, and these and other major zoning changes are ready for a scheduled third and final vote before the BMA at the next meeting on December 12. These zoning changes could affect many Germantown residential neighborhoods and have the potential to significantly alter the flavor of our retail districts.

All of this was pointed out to me by Sarah Freeman in an email late last week.

The second reading (at the last BMA meeting November 28) was supposed to be the "public hearing" for these zoning changes, and this "public hearing" was not noted on the City of Germantown web page, except as an agenda item for the BMA meeting. Nor was there any official document easily available for public review before the meeting took place. After Sarah emailed me, I contacted the City and they provided me with the link to an original document noting all the changes. For transparency, I link it below (and no, I have not carefully examined this, but Sarah has been reading and reviewing it.)  We need as many people as possible looking at this.

In a twelve minute October meeting of the Planning Commission, these measures were passed. There was some explanation but no real discussion.


Just two of the changes were noted by Cameron Ross at the meeting:

1. The warrant of one story building within T4 T4R T5 T5R districts that was suggested to be at 20 feet (ground to flat roof or eave or roof)

2. The addition of limited retail allowances as defined within the smart code to T4R and T5R.

The whole point of  "Smart Growth" was that we are a landlocked community, with little space for commercial growth, and that we need to recognize that retail space is at a premium. The best way to grow would be to grow "up" with higher density developments.  Along with this, the setbacks to the sidewalks were reduced, and parking lots were required to be away from the streets and behind the storefronts.

Here is an article that states the reasoning behind "Smart Growth". (The Thornwood development is an example of this.)

Apparently there is little demand from developers for multi-story retail developments in Germantown. While I can understand a possible need to step back from this requirement, how exactly will the return of the strip mall mesh with the "no setback" (from sidewalks) that was also part of Smart Growth? I talked with Sarah about this, and her concern is that there will now be Sunglass Hut stores ten feet from the sidewalks.

One of the biggest changes has to do with lighting from garages of commercial businesses. My familiarity with this issue is due to various hearings held concerning the Travure development, which is located somewhat near me. Nottoway residents had issues with the lighting in the proposed garage illuminating their yards and windows, and Gill Properties was required to put barriers on the garage openings to block the light. The developer was reluctant to comply, and kept trying to argue that "lighting" in the code really meant light fixtures. That did not fly, and rightfully so. Apparently the remedy now is to change the ordinance about commercial lighting not being visible to residential areas from garages to light fixtures not being visible. So under the proposed ordinance it will be okay for commercial lighting to interfere with the privacy in a dark residential neighborhood, as long as the lighting fixture is hidden. Nottoway residents need to pay attention because Gill could always come back to the Planning Commission with revised plans based on the new ordinance.

Personally, I admit to being very uninformed about most zoning issues, and therefore I am going to quote some of what Sarah sent in her email (The page numbers refer to the page numbers on the linked document above.):

If you click on the link Michele sent you (Pauline), you will see that many of the changes are fairly benign. Some simply clean up references to the Economic and Community Developer Director (Cameron Ross), see pg. 18. On pg. 22, Sec. 23-67, the changes replace “petition” with “application” but many typos remain unfixed (should read “an application”—not “a”). The new method for approving modifications of wireless transmission facilities is on pg. 31. On pg. 40, Sec. 23-136 – Parking Regulations, proposed changes require that vehicles (that do not exceed 8 ft. in height and 20 ft. in length and 8,000 lbs) “shall” be parked on hard-surfaced driveway areas and designates where other trailers, etc. may be parked on personal property. The Residential Estate District (R E 10) zone is stricken entirely from the ordinance (see pgs. 41-46). There is an odd hiccup in that there is a second and following pg. 46 which is different from the other pg. 46. On the second pg. 46, proposed changes to yard requirements under Sec. 23-183 add language requiring rear yards to be not less than 50 ft. in R E districts. Pg. 93 indicates new businesses that can be in C- 1 zones, viz. professional services businesses such as architectural, accounting, engineering, and law offices and child care facilities and medical and veterinary clinics.

At pg. 97 it begins to get interesting. They need to clean up the language as it is supposed to deal with the number of parking racks provided “at a ratio of one bicycle space per 20 motor vehicle spaces (1:20). No more than 20 spaces shall be required for any project.” These seem to be only for the non-Smart Growth commercial zones. The language references both bicycle spaces and motor vehicle spaces but ends with a statement that does not say which is referred to in the limitation to “20 spaces.” Just dumb. This bike spaces change comes up again on pgs. 105, 113, 119, 124, 183, 236.


The other stuff gets more serious. Pg. 98, for planned shopping centers: “The Planning Commission may approve modifications to the parking requirements in order to accommodate a particular mix of uses.” This sounds like new authority has been granted to the PC regarding parking “modifications”/exceptions. They have tried this by other means in the past and this looks like the latest attempt. This change comes up again on pg. 105 and 112.


Pg. 194 begins to get into the critical Smart Code rezoning changes. Sec. 23-745 – Warrants. These are deviations to the zoning requirements that potentially are allowed “in those instances where reasons are shown that would justify a deviation from the strict requirements of the provisions of this article as to property to which this article applies by operation of law or by election of the property owner, the PC (Planning Commission) shall have authority to permit such deviations.”


The proposed changes strikeout that Warrants can be requested for designating civic buildings and civic spaces and instead insert that Warrants can be given to “Decrease building height in T4/T4R (secs-23 -769 – 1 (a) and T5/T5R (23-770 1 (a).” This means that the current restrictions requiring buildings in these zones to be two or three stories would change so that buildings could be only one story, minimum of 20 ft. in height (by Warrant). Completely throws out the whole idea behind Smart Growth. This appears to be, as you noted, an admission that “Smart Growth” has failed.


Pg. 203, Division 3 – Use Standards, Sec. 23-763 – Permitted Uses is highly problematic as the reader cannot tell what zones are involved as the “Formatted Table” bubble obscures the zone labels—we can’t tell what uses are being changed for which zones. On the following page, we can’t tell what the new red boxes mean as far as use changes!


Pg. 207 is where proposed changes to T4R and T5R would add “Limited Retail” to what could be permitted in these restricted zones. These were supposed to be transitional zones between single-family dwellings and the high density T4 and T5 developments. Currently, only residential and parking facilities are allowed. I have attached a photo of what “Limited Retail” means. But looking at the tables on pgs. 207 and 208, it appears to indicate that everything that can be done in T4 can be done in T4R and T5R. Pg. 227 also shows the changes in Permitted Encroachments in what will be allowed in T4R and T5R. This is a mess and a nightmare!


It is important to note that Warrants can also be obtained to permit “Lighting levels beyond those permitted.” Pg. 228, deals with the restrictions on the parking facilities that can be located in T4R. Current language states that when a parking structure is located at the perimeter of a building “it shall be screened or treated in such a way that cars and lighting are not visible from the street or from abutting residentially zoned properties.” The proposed changes strikeout “lighting” and substitute “light fixtures.” The problems we are concerned with aren’t “light fixture” pollution but light pollution! So much for the much touted promises of “Smart Growth”-- that residential areas would be protected from the light pollution of these huge dense developments adjacent to our homes!


When I spoke with Sheila Pounder (city planner) about how much light could by law be emitted from the parking facilities, she wasn’t sure but thought it was two foot-candles. But Warrants could permit even higher levels.

There is so much more to chew on, thanks to Sarah, that I may need to eat my organic carrots instead of juicing them. (I am really trying to change my eating habits and move on from eating Snickers and Mars bars rather than looking into governance issues.)

Sarah obtained the most recent zoning map from Germantown, which she told me had at least two errors in them. I am uploading her snapshots of some of the affected areas: 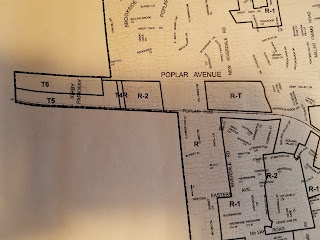 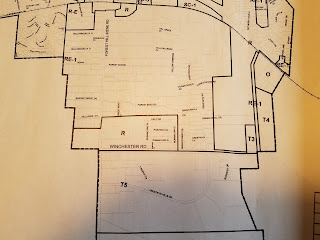 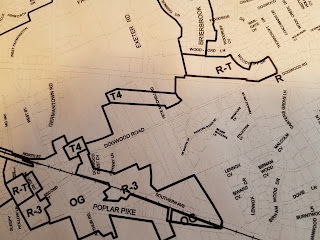 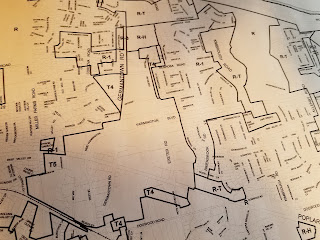 Shining a Light feels that we need a REAL public hearing on these zoning changes. I admit to not being well informed. I do feel that I am opposed to the lighting change, unless I can be convinced otherwise. I would love to hear the pros and cons of all the other changes.

The only way to have a true public hearing about this is to contact your aldermen and insist on it. We all missed the "public hearing" for which notice was given but not in any way that we would actually notice. We were all too busy with the election, Snickers bars, organic carrots, our own lives, or whatever to follow and notice the agenda item for the last BMA meeting.

We need this for TRUE transparency, rather than just a weak attempt to meet the legal requirement to give notice.  If you agree, please contact your aldermen.

Here is a link to the email addresses of four of the aldermen:
Germantown Aldermen


I do not know the email address for our newly elected fifth alderman, Dean Massey.  If I find out I will include it as an update to the blog.

An update in my next blog post!!  The third reading has been put off until the January meeting.  See this post HERE.