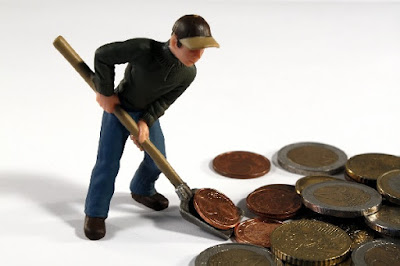 Abstract: A substantial number of the City's long-standing, loyal employees are nearing retirement age, and the City must ensure their pensions are secure, supported by a properly managed and funded retirement plan. The City pension fund lost money in the last fiscal year, and it has significantly underperformed comparable indexes for the past ten years. Furthermore, current estimates of future performance (for actuarial purposes) are, as acknowledged by the City's own plan advisor, inflated beyond reasonable expected returns. If the fund's future returns simply match historical performance over the past ten years, the City will need to contribute ever-increasing amounts to the fund each year. This will either constrict future City budgets or require tax increases.

I shine a light on the following:

*Losses this past fiscal year were significant, while the benchmark was up 5.6%

*The past ten years showed pension fund returns lower than the benchmark.

*Alderman Sanders asked about increasing contributions to pension fund in the budget in BMA work session, and Patrick Lawton obfuscated in his answer.  I heard no discussion of the difficulties the fund faces at the either the FAC or the regular BMA meeting.

*The expected returns from the pension fund are overstated, but lowering the expectations to a realistic level would clearly reveal the gap the City will need to fill in order to honor its commitments.

*Due in part to underperforming assets, the RPAC  this year voted for changes in the allocation of the funds investments, against the advice of the fund manager.

*Late this year, the actuary will compute the amount the City should put into the pension fund. One estimate suggests it could be as high as two to three million dollars.

*Alternative investments could be considered to try to increase the returns, but that could increase risk or decrease the liquidity of the fund.

I glanced over the budget prior to the most recent BMA meeting, the public hearing on the budget. My eyes suddenly stopped at the Pension Fund page (p. 110).  From the column "FY 20 (year ending June 30, 2020) Estimate":

As can be seen, these figures show an estimated net loss for the year of approximately 4 million dollars, or a loss of over 5%. Yet both the S&P index and bond indexes were up well over 5% for the same period of time. 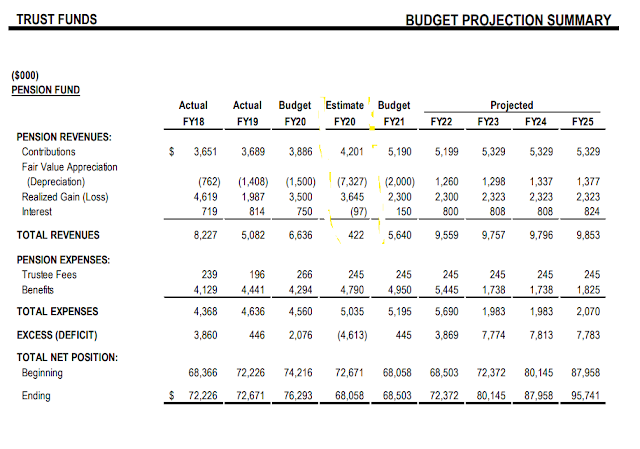 Contrary to what the above figures show, the fund manager's report on returns through June 30 reveals there was a FY 20 loss of only 1.7%. With the information available to me, I cannot reconcile these amounts-- there likely could be timing differences in the accounting entries and/or the reporting, or perhaps the budget figures overestimated the loss prior to the actual returns becoming available. But, either way, both figures are well below the benchmark amount reported by the fund manager for the period (FY 2020), which was a positive 5.8%. Below are the full manager's reports, for the first and second quarter of calendar year 2020.

I saw no reference in this year's public budget to additional City payments into the pension fund due to these losses, but perhaps I missed it in the extensive amount of material provided. Nor did I hear any discussion of the pension fund in the Finance Commission meetings on the budget, or in the most recent BMA meeting. This is surprising, as the need for increased payments into the pension fund over the next five years would affect the five-year capital funds budget passed by the Finance Commission and BMA as part of the overall budget.

There apparently was a reference to increased payments to the pension funds in the 2021 budget in the material given to the aldermen. At the July BMA Work Session on the budget, Alderman Sanders asked the following,

Alderman Sanders: I did have a question on these individual budget detail sheets. You had one thing that really stuck out to me was our additional money we were putting into our retirement and our cash balance.  It looks like we are adding $828,900 into our retirement and $74,600 in our cash balance plan. I don't know what's going on there, why we are adding so much into those two.

You may listen to that question, and Patrick Lawton's rambling, non-response in the video below. He offered no specifics about the performance of the fund; nor did he address the need for increasing future payments into the fund. These two issues, needless to say ,bear heavily on the discussion of the FY 2021 proposed budget, particularly in light of the proposal in the budget for adding a tournament sports complex likely costing well in excess of $6,000,000, a complex which should be noted, which would have to be subsidized by the City, to the tune of $300,000 per year.

There was, of course, extensive discussion of the returns in the pension funds, as well as the likelihood of future payments into the funds, in the Retirement Plan Advisory Commission (RPAC) meetings on April 1 and August 12. These video meetings are available on the City website. Because I wanted to link to a few discussions in these meetings, I uploaded the audio of the two meetings to YouTube. This file is embedded below.

Gerber-Taylor has been the investment advisor for the pension fund since 1988. Since inception, they report higher returns than the benchmark-- 7.9% versus a benchmark of 7.5%. The bulk of the higher performing years were concentrated in the first years of the fund, when the pension fund was much smaller than it is now. Unfortunately, none of the returns in the reported periods in the last ten years (6.4% per year average overall), beat the benchmark (8.4% per year over the ten year period). This screenshot of performance of the fund is from this year's fund manager report ending 6-30-2020, which is linked above.
Discussion in the first RPAC meeting centered around the performance of the fund through March 31, which at that point was a negative 14% due to the abrupt slide in the stock market. The causes of the fund's underperformance were discussed, and  some changes in the asset allocations were approved at the meeting, which was not the recommendation of the fund manager. With the recovery of the capital markets, the August meeting focused not only on allocations within the fund, but also future expected returns of the fund. The fund manager stated that returns of 7.0% to 7.5% (as indicated in the actuarial reports) were unrealistically high due mostly to the plunge in interest rates and other market conditions. He recommended that the City use a lower expected rate of return, and steadily infuse the pension fund with more money each year, so that the budget hit in one year would not be too difficult.

A few of the specific points and conversations in the meeting are linked below:

Link Alderman Rocky Janda leaves meeting for an emergency as investment advisor discusses poor returns on some investments such as pipeline partnerships and investments in Japan.

Link Member asks how the losses will affect the budget if there is no improvement. Patrick Lawton states that the City would have to make contributions to the fund like we did in 2008-2009. Another member makes a statement that we should stay the course with our plan like we did in that period of time, and not make the mistake of getting out of the market.

Link Pension fund is fully funded at $90 million dollars. Actuary looks at 25 year returns which is around 7.5%.


The Commission discussed and voted for several tweaks to the allocations in the fund, contained in the minutes which can be found here:  Minutes

Link Member asks "How achievable is  the  7.5% return, in your opinion?  Advisor: It is a pretty tough nut, when you are thinking about equity valuation levels where they are today with expected returns in the 5% or so range. We are going to need to see value added from our managers to be able to get there, when you talk about bonds sort of in 1.0 to 1.5% returns. It is a pretty tough nut.................. Mathematically from a probability standpoint, no question, it is the math we are all facing, a low return environment, so what does that mean, higher contributions. The one good thing this means for Germantown is that this fund is frozen, that was a great move, years ago, but what it means for investors and for pension funds is higher contributions, relatively speaking, and for endowments and foundations, probably need to watch your spending policy, you know, lower it to the extent that you can. We are dealing with that with our clients across the board, it is a tough situation.

Link Where does the portfolio protect itself if we have another Q1 or some semblance? Answer: Well, yeah, we have a fair amount of beta in this portfolio.

Link Member:We have to fund the pension fund in November or December............ This is now August............I am guessing this is probably about a two or two and a half million dollar.into this account from the City. Rocky Janda: I hope not but I think you are probably right. This is one of the biggest contributions we have ever done and we are still using almost eight percent. (turns out this is 7.25% assumed return). Advisor: My point earlier, I counsel. that this probably needs to go lower and I know this increases the liability and increases the funding.but it is probably the prudent thing to do. It does not have to be done in one fell swoop but it is really hard to see how we get a 7.0% return with tools in the toolkit.

The balance of the discussion was about how to get the returns higher with different types of investments.


Germantown is not alone in its issues with pension fund shortfalls. Here is a larger discussion of the problems facing states and municipalities: