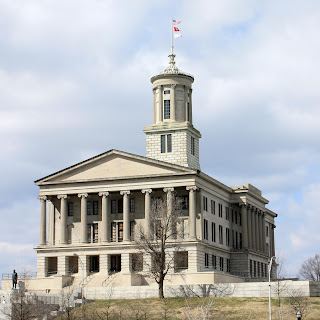 On March 1, Mayor Palazzolo wrote the following letter to the Germantown state legislators, setting out the "official" positions of the City on proposed bills, (For those that cannot easily read the images below, the PDF of this memorandum can be found here.) 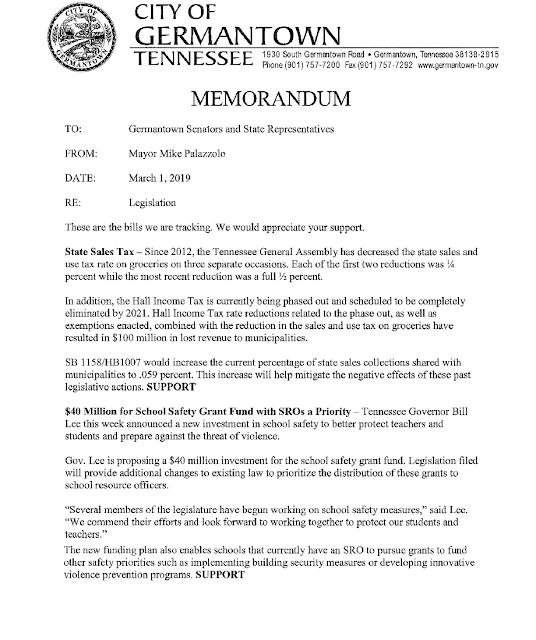 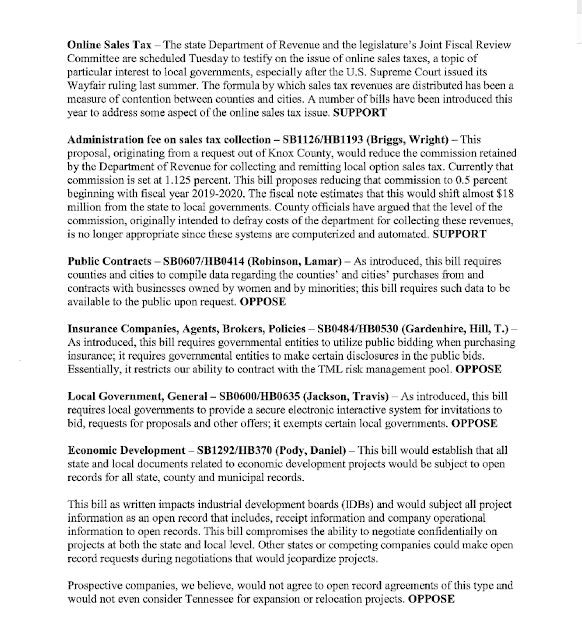 Unfortunately (and incredibly) the BMA has not been asked to give its input on the legislative agenda.

At the recent BMA retreat, (see March 6 blog post)  the general subject of the legislative agenda was discussed, but details only included information on the online sales tax. Alderman Massey specifically asked that the BMA discuss the full legislative agenda, and the Mayor sounded amenable, although he made no specific promises.

Partial Quote: (listen starting at 14:23 for the entire exchange)

Mayor Palazzolo goes on to explain that sometimes there is not time to consult the BMA.

I am not sure I have enough information about the specifics of each item to definitively state that I either support or oppose specific proposals, but all of the items that the administration opposes particularly interest me. The public needs to hear discussion and debate on these (and all other) items. My gut reaction is to strongly favor the measures that the administration opposes. At the very least I would love to hear the pros and cons at a BMA meeting. And certainly it should be the BMA that sets the legislative agenda, not the Mayor alone.  I briefly discuss three of the proposals below.

SB0600 requires that municipalities have a secure method for bids to be accepted electronically. The text of this bill is found here:

The administration gave no reason for opposing this, and it seems like a great idea to me. The City might even be able to obtain more bids for projects if we could accept bids electronically. In fact, I had no idea we didn't already do this. But if we did, why would we oppose the bill? I would love to hear more about this proposal and why Mayor Palazzolo opposes it.
***********

SB1292 prohibits government payments, fees, and other forms of financial benefits paid or bestowed, or agreed to be paid or bestowed, to a private entity from being deemed confidential under the open records provisions of state law unless the transaction or proposed transaction falls under a specific state or federal law.  The full text is found here:

This allows the public more transparency concerning tax incentives given to businesses to relocate to Tennessee. Recently The Tennessean ran an article which described the haphazard rules regarding public records on tax incentives.

The administration indicates that passage of this bill would be a disincentive to businesses to relocate to the State. If that is true, I would like to know the specific reasoning. The letter did state that it did not favor the bill "as written." How would the City like to have it written?  The citizens don't know because these have not been discussed at a public meeting.

SB0607  As introduced, this requires counties and cities to compile data regarding the counties' and cities' purchases from and contracts with businesses owned by women and by minorities; requires such data to be available to the public upon request.  The full text of the bill is here:

It is surprising that the administration opposes this bill, given all the hoopla and publicity around the resolution passed in August 2017 that stated, in part "be it resolved that the City of Germantown supports the Mayors' Compact to Combat Hate, Extremism and Bigotry and supports the Mayor's effort to work with executive and legislative partners at federal and state levels to ensure that civil rights laws are aggresively enforced."

Unless the public can examine the contracts and bids by women and minorities, how can we be assured that the City is living up to its promises, and following the Civil Rights Act of 1964? To me, this is simply another transparency issue. Why does the City oppose this?  Or was the resolution that was passed over a year ago simply a hypocritical and expedient whim by the BMA (as I suspected at the time)?

I hope that the aldermen insist on discussing and voting on these legislative items in an upcoming meeting. If that happens, the public will be better informed about the pros and cons of each bill.