Opposition to Viridian Growing Across the City 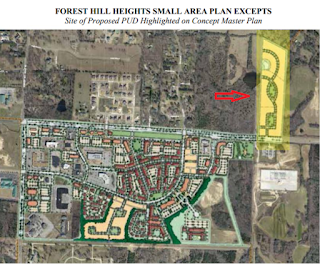 The decision to exclude certain projects from the recently passed moratorium on apartment building was a controversial one, partly because it leaves the Forest Hill Heights area with the potential of having 610 (or more) rental units, when only 252 rental units were recommended as part of the Forest Hill Heights Small Area Plan (further discussion here). Alderman Massey’s proposed amendment would have eliminated these exemptions. The two apartment complexes in the Forest Hill Heights area that have specifically been exempted from the moratorium are Watermark, which has full approval by the BMA, and Viridian, which has only been given preliminary approval.

My biggest issue all along has been with Viridian. For one thing, unlike Watermark, it is not fully approved. I also had some concerns after watching the Planning Commission meeting where Viridian was discussed, and only passed by a 4-3 vote, despite strong staff support for the project. Those opposed gave a very good reason for their “no” vote-- namely, that it was not the type of project that was contemplated when the plans were formed for the area. I have other concerns as well. The developers were seeking greater density than was recommended by staff, and said they preferred four-story buildings. Nearby residents, however, had stated that four story buildings would tower over adjacent single family homes. In response to this objection, the developers stated that three-story buildings would be of inferior quality because installing elevators would not be cost effective. In other words, four-story buildings with elevators would be high quality, but would tower over private homes. Three-story buildings would not tower over homes, but would be of inferior quality. Furthermore, Viridian, if fully approved, would be built next to the newly approved single-family development Goodwin Farms. Residents in the area are concerned that the apartments would affect the homes’ values.

My ears perked up as I watched the recent BMA meeting when former GMSD board member Ken Hoover, who does not even live in Forest Hill Heights, spoke in opposition to Viridian during “Citizens to Be Heard”.  Here are Ken’s remarks:

In communicating with him subsequent to the BMA meeting, Ken said that Viridian would not only increase the number of FHH-area apartments to a level beyond that recommended by the Plan, it would also fail to satisfy the Plan’s other goals. (see chart below prepared by Ken). 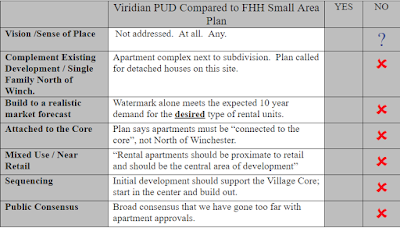 He believes that the Planning Commission should insist that the project meet all stated goals before it gives final approval to Viridian. He expressed surprise that a majority of the BMA voted in December to give preliminary approval to Viridian when it met none of the goals of the FHH Small Area Plan passed by the BMA in April of 2016. It is Ken’s view that the approval of this particular project would be detrimental to the entire city.

Ken informed me that he likes the Plan’s vision for Forest Hill Heights—namely, a village green, retail, restaurants, condos, and apartments nearby, and that Watermark fits that vision. He also agrees that reasonable people could disagree with that. He emphasizes that achieving that vision will require intense attention to detail at every step. Along this line, Ken notes that the plan itself specifically warns against the folly of leaving development to chance.

Ken feels that the outcome of the vote in the Planning Commission could have been different if the staff had focused on the Plan’s goals. He feels that damage has been to the public trust. “We trust the City Staff and the BMA to adhere to the Plan. That hasn’t happened so far in this case.”

For the city leaders who insist “we are following the plan”, simply because it followed the required approval process, Ken offers this direct quote from one of the Planning Commission members:

“That’s the whole reason to do the plan; What do you want to be built in this Forest Hills Heights neighborhood?  It’s a disservice to them (all the citizens who participated) to go in and say we wanted you to spend time and effort to tell us what you want, and study, and have meeting upon meeting and come up with this wonderful plan, and then to have someone say ‘Well, we really don’t think that makes any sense to us.’”

Ken asserts that the voice of the people has been ignored here, and I wholeheartedly agree. The good news is that Viridian will appear before the Planning Commission again.  If the Commission insists on adherence to the goals and principles in the Plan, Viridian in anything close to its present form will not be approved.
Posted by Polly at 2:08 AM